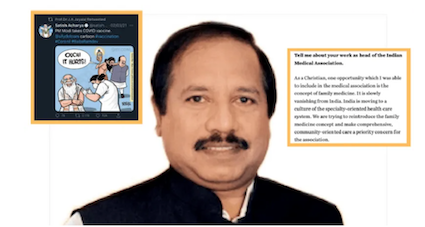 The Indian Medical Association (IMA) president Dr. Johnrose Austin Jayalal, is using his position and the pandemic as an opportunity to convert medical students, patients, and fellow doctors into Christianity. This is the complaint the Legal Right Protection Forum (LRPF), a legal-activism group, has written to the Ministry of Home Affair (MHA).

“This is nothing short of a vulture-like approach to human suffering, death and devastation. In the weakest moments of their life, instead of giving comfort and solace to the suffering millions, Dr Jayalal and his team of rabid evangelists are making grandiose plans to exploit the sufferings of fellow humans by converting them to Christianity. It is also shocking that as a medical doctor, instead of relying on his medical skills, he has chosen to thrust the fear of God into people suffering from the Covid-19 Pandemic,” the complaint filed by LRPF said.

There have been many instances where Dr. Johnrose can be heard saying that he wanted to use hospitals and his position to convert Hindus to Christianity.

“I am working as a professor of surgery in a medical college, so it is also a good opportunity for me to carry on the principles of Christian healing there. I also have the privilege of mentoring graduates and the interns,” Jayalal has said in one of his interviews, says a report.

LRPF, in their complaint, had pointed out how Jayalal had tried to give a communal side to the pandemic by saying that “The ‘Hindu Nationalist Government’ wants to destroy modern medicine saying it is ‘western medicine.’ Please keep this in your international prayers. If everything goes their way, we will not have pure modern medicine courses in India by 2030.”

Beyond that, Jayalal has been spreading information that it was rather Church and Jesus taking care of people rather than the government. He even accused the central government of advancing Hindutva by promoting Ayurveda and the Sanskrit language. He thinks that it “is an indirect way for the government to introduce the language of Sanskrit and the language of Hindutva into the minds of the people.”

He believes there’s a “silver lining” amid this deadly pandemic as the Christian community had also grown.

Beyond this, the IMA president has also been indulging in spreading hate against the Hindu community and government leaders, including Prime Minister Narendra Modi, Union Health Minister Dr. Harsh Vardhan, and UP Chief Minister Yogi Adityanath.