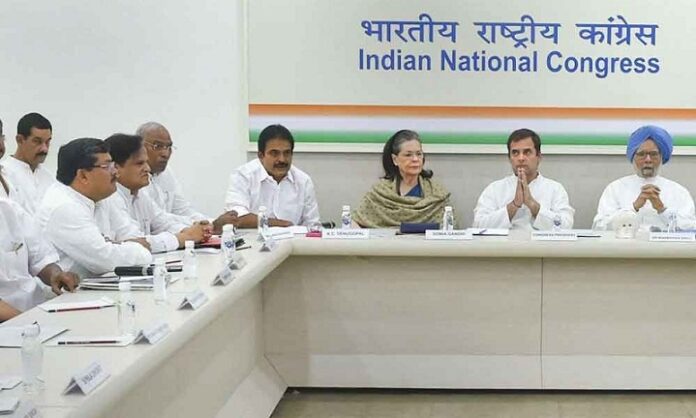 Congress has made a big mistake by trying to swim ashore for 2024 on the shoulders of Rahul Gandhi.

Rahul Gandhi stays as Congress president when his party lost 170 out of 180 seats it was in a direct contest against the BJP in 2019 General Elections.

In the Hindi heartland where it has state governments, it bagged none in Rajasthan, one in Madhya Pradesh and two in Chattisgarh.

Flushed down the drain in 18 states.

A sorry two in Uttar Pradesh.

Even Gandhi himself locked out of doors of Amethi.

On Saturday, the Congress Working Committee (CWC) prostrated at the feet of Rahul Gandhi and vowed rather the dust gathers over them than Gandhi scion walk s out of the room. A.K. Antony didn’t “agree that it was a disastrous performance! P. Chidambaram became emotional that his Tamil Nadu  and South in general could feel betrayed; and former Prime Minister Manmohan Singh, who history would remember less as an economist and more as a boot-licker (sorry I can’t find any other apt adjective), urged Gandhi not to make a hasty decision.

Today, you ask people of India, even those within the Congress fold, and 9 out of 10 would say Rahul Gandhi must go. We don’t even need to bother—the 2019 verdict says it. Only 54 lakh votes in Uttar Pradesh which Gandhis call their home, say it (damn, they couldn’t beat even Apna Dal). Allies like Jignesh Mewani and Chandrashekhar Azad and not Mamata, Akhilesh or Mayawati say it. But the CWC is the presiding deity. They alone can blow the conch. They alone distribute the prasada  (prayer-sweets).

Think about it. Why would Rahul Gandhi and all the President’s Men (read CWC) act as a coterie? I mean quite a few of them have been defence, finance or home ministers of this country. They know they are an object of derision in the country. Know that the party is on reed sticks in the high tide of times. Know that it’s on way to becoming irrelevant in Indian politics. Why then stick to the man who symbolizes everything which is bad for the Congress?

The answer is simple. Survival. Not of the Congress or the Country but self. Quite a few are on bail. Sons and son-in-laws are a call away from lockups. Together they could at least be heard. The Congress ecosystem would at least give them space in compromised Lutyens Media. Without Rahul or Priyanka or Sonia, who do you think would reserve front page for Anand Sharma or Ghulam Nabi Azad? How would P. Chidambaram have his column in Indian Express? Who would hear to their swagger on “saving democracy” or “freedom of speech”? Where would they find favourable judges or bureaucrats? Who would rustle up mombati-gangs or award-vapsi brigade?

Let’s look at the CWC composition. It has 25 members, three being Sonia, Priyanka and Rahul himself. Ahmed Patel, Ghulam Nabi Azad, Anand Sharma, Ambika Soni etc are hardly credible. You wouldn’t have heard of Avinash Pande or Dipak Babaria. Have you? Ok so what about Gaikhangam or Tamradhwaj Sahu? Congress could call it CWC, India views it as rubber-stamp.

The only people rejoicing in Rahul Gandhi staying put must be Lutyens Media. They need Gandhis for survival. Some of you would jump on the names of Shekhar Gupta or Sagarika Ghose; Rajdeep Sardesai or Barkha Dutt; Ravish Kumar or Vir Sanghvi etc. But singling them out is unfair. It’s the ecosystem, the filth which breeds fleas, pests and cockroaches.

That’s why I feel we would only get more of 2014-2019 in the next five years. A floating Rahul Gandhi is good for vermins and bugs. Be prepared to read the same muck in your newspapers. As long as you buy the newspaper which has Rahul Gandhi on its front page every day, this fraud would survive. When you call them out, Rahul Gandhi would lose his spell over his men. India can then attend to its business.