Congress is imploding by the hour 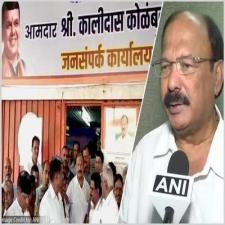 Congress is coming apart from seams as its MLAs and allies alike are deserting it by the hour.

Congress MLA from Mumbai (Wadala-Naigaon constituency), Kalidas Kombalkar was in open revolt by Wednesday afternoon, hoisting the image of rival and BJP chief minister Devendra Fadnavis in front of his office in open defiance of his party’s command. Kombalkar, a seven-time MLA,  is set to join BJP soon.

Just 24 hours before,  Sujay Vikhe-Patil, son of leader of opposition in Maharashtra assembly Radhakrishna Vikhe-Patil, had joined BJP that had Congress quaking in its boots.

A day before, Vallabh Dharaviya, MLA from Jamnagar (Rural) had resigned the very day the  Congress Working Committee, the highest decision-making body of the party, was holding its meeting in Ahmedabad on Tuesday. He was the third Congress MLA to resign in the last four days.

In Karnataka, JD (S) is not budging in giving up the seat of Mandya to Congress as it hopes to field Chief Minister HD Kumaraswamy’s son, Nikhil Kumaraswamy, from the constituency. To queer the pitch further, Sumalatha, wife of late film star M.H. Ambareesh, is being supported to contest the seat by state Congress leaders.

Congress and its state units are in open “war” over proposed tie-ups in West Bengal, Delhi and Karantaka with TMC, AAP and LDF respectively.

Not that the three ruling parties in these three states have actually warmed up to the Congress in the first place. Mamata Banerjee has vehemently refused to do anything with Congress; AAP’s head Arvind Kejriwal is accusing Congress of putting the interest of the country on the backseat; and Pinaryi Vijayan is spraying his venom in Thiruvananthapuram.

Not just MLAs and allies but Muslims and Dalit leadership around the country are turning its back on the grand old party of the country.

Prakash Ambedkar of Bahujan Vanchit Agadhi, in which he has Asaduddin Owaisi of All-India Majlis-e-Ittehadul Muslimeen (AIMIM) as his ally, turned its back on Congress on Tuesday when it announced that it would contest all of Maharashtra’s 48 seats alone. Other smaller parties, such as Swabhimani Shetkari Sanghatna also don’t want to have anything to do with Rahul Gandhi’s Congress party.

One of Assam’s biggest Muslim party, All-India Union Democratic Front (AIUDF), meanwhile is aghast with Congress. Said its leader, Badruddin Ajmal: “I can’t say we haven’t spoken (with Congress); neither can I say we have spoken. I will say something to you and they will deny it.”

So confused is Congress of its identity that Communists Party of India (CPI-M) state secretary Kanam Rajendram lashed out on Tuesday: “Congress has abandoned the concept of secularism in Kerala to uphold Hindu communalism.”

Though one still doesn’t know exactly what made Sharad Pawar, supremo of National Congress Party, back out from the 2019 Lok Sabha elections, there is little ambiguity about Congress’ biggest bet in Bihar, Rashtriya Janata Dal (United), launching a savage attack on them.

RJD (U)’s vice-president Shivanand Tewary has accused Congress of not taking its allies along. “Its’ a proven fact that we have much bigger support base than the Congress and several other parties in Bihar.”