Congress jolted as Jitin Prasada shifts to BJP: ‘Only BJP is a truly national party’ 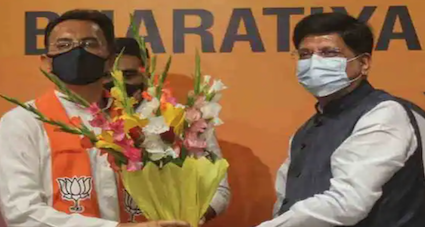 He quit Congress after “He felt he was unable to serve the interests of his people and society”. His induction took place at the BJP’s national headquarters here in the presence of Railway Minister Piyush Goyal and BJP media cell in-charge Anil Baluni.

Alleging that he was not allowed to work in Congress, Prasada, a big Brahmin name in Uttar Pradesh’s politics said, “I felt that what is the relevance of staying in a party if you cannot work for your people or protect their interests.”

“I felt I was unable to do that at Congress. I thank people in Congress who blessed me all these years but now I will work as a dedicated BJP worker,” Prasada said.

“I have a three-generation connection with Congress, so I took this important decision after a lot of deliberation. In the last 8-10 years I have felt that if there is one party that is truly national, it is BJP. Other parties are regional but this is a national party,” Prasad told the media.

“If there is any political party or a leader standing for the interests of the nation today, given the situation that our country is going through, it is BJP and Prime Minister Narendra Modi,” he added further.

The huge setback to Congress comes when Uttar Pradesh elections are due for early next year. Prasad’s decision to quit the grand old party shows how even the young political leaders are feeling suffocated and see no future for themselves in the party.

Notably, he was one of the closest aides of Rahul Gandhi and was even part of the G-23 group who had written an “open letter” to Congress interim President Sonia Gandhi, asking for in-party reforms.

He had even slammed the Congress party for making an alliance with the Left and the Islamist Indian Secular Front (ISF). Jitin Prasada had tweeted, “Alliance decisions are taken keeping in mind the best interests of the party and the workers. Now is the time for everyone to join hands and work towards strengthening the prospects of the Congress in the poll bound states.”