Did Vajpayee and Modi really differ on Kashmir? Or a myth has taken hold in Valley? 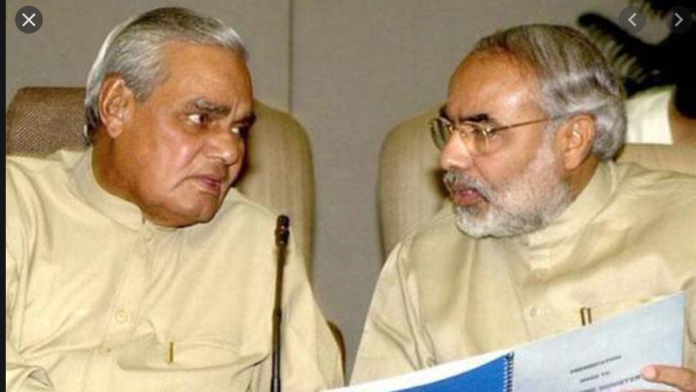 In Jammu and Kashmir, particularly Kashmir Valley, a perception prevails that Prime Minister Narendra Modi’s policies are very different from that of Atal Behari Vajpayee, who was the first BJP Prime Minister. Vajpayee, the sublime poet that he was, talked of negotiations with Kashmiris on the basis of “Insaniyat and Kashmiriyat”.

Modi removed the special status of J&K by scrapping Article 35 A, restating Article 370, and its bifurcation into two Union Territories (UTs) on August 5, 2019. He did away with the separate Constitution of J&K, separate flag and changed things drastically. Something that Atal did not do and dealt with extreme diplomatic finesse with Kashmir.

Does that mean Atal and Modi are poles apart when it comes to their policy or “doctrine” towards J&K? Or are they misunderstood and misinterpreted by most Kashmiris who praise Vajpayee sky high and revile Modi no end? If truth be told, there is no difference in substance or pith of their policy, and the only difference is that of style and not substance.

Perhaps pointing out a basic fact that Vajpayee started his political career with Shyama Prasad Mukherjee can help. Incidentally, Atal had set his eyes on becoming a journalist and got his first pay working as one. When Jan Sangh was founded, Atal was assigned to work with its founder.

In early 1953, Mukherjee started his campaign of “Ek Vidhan, Ek Nishan, Ek Pradhan” when the Constitution of J&K was being discussed in its Constituent Assembly. On June 7, 1952, the separate flag for J&K was adopted and this was something that was the most brusque ideological affront for Mukherjee, till then. On May 11, 1953, Mukherjee reached Madhopur town on the eastern bank of Ravi river. As one crosses from east to west on the Madhopur bridge, one leaves behind Punjab and enters into J&K.

Atal accompanied Mukherjee as a close aide, taking copious notes, observing the Jan Sangh stalwart from close quarters. But at Madhopur, Mukherjee decided to turn back Vajpayee, asking him to spread the word across the nation. As Mukherjee entered J&K, without permit which was prevalent then, he was arrested. He died in far-off Srinagar on June 23, in custody, within being given any chargesheet.

The “illegal” act that Mukherjee had committed was entering J&K without permit, and he did so as an act of political posturing fully conscious of the implications of his action. In his martyrdom,  the Jan Sangh founder became an icon and epitome of everything that he stood for. Vajpayee spent his earlier days in Jan Sangh, leaving the Janta Party and joining the newly founded Bharatiya Janata Party (BJP) on the question of “dual membership”.

Vajpayee and many others walked out, preferring to be out of the government, and stay in RSS. They had no doubts about their ideological moorings and Sangh was bigger than any government. Even in Parliament, as PM, Vajpayee had stated clearly that three most important points for the BJP were Ram temple at Ayodhya, Article 370 abrogation and Uniform Civil Code (UCC).

On Atal’s birthday yesterday, a book was released authored by Shakti Sinha, a former bureaucrat who worked in the Prime Minister’s Office (PMO). Sinha had first hand access to most of what was happening around that time. His book is titled “The Years That Changed India VAJPAYEE” and carries two pictures of Atal, one on front and one on back cover.

A webinar was organised in the evening in which select people participated. Among the participants was Tariq Ali Mir, a Kashmiri journalist living in Srinagar. He put two questions to Sinha and the answers to these questions help clarify many doubts, narratives in public domain.

Mir asked Sinha whether Modi was following Atal’s “doctrine” on Kashmir as claimed by him. Unhesitatingly, Sinha said Modi and Vajpayee were on the same page about Article 370. Elaborating on this, Sinha said that Vajpayee believed, like Modi, that 370 was a “temporary provision” which had to go. Vajpayee had time and again made it clear that the BJP agenda on 370 was being kept aside in National Democratic Alliance (NDA). Atal said that in a democracy, numbers are supreme, and the party didn’t have the numbers to implement its agenda, Sinha said.

Mir asked another question about what Vajpayee could have meant when he talked of Kashmiriyat. Sinha said Vajpayee was clear that the methods of worship could be different, but the culture of all Kashmiris, be they following any religion, was the same. Atal believed that all citizens should be governed by the same set of laws and rules, Sinha said.

There is no doctrinal difference between Atal vision on Kashmir and that of Modi was the point that emerged clearly from the two questions and their answers. On the cover page of the book, there is a message which reads: Atalji was an ideal, a guru and a model who inspired me deeply: Prime Minister Narendra Modi.