Digvijay is only a continuation; it began with Savarkar 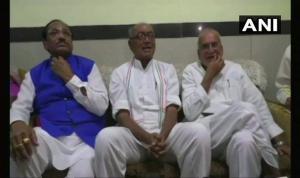 Congress leader Digvijay Singh’s attempt to create the bogey of Hindu terrorism and dragging Rashtriya Swayamsevak Sangh into it is nothing new. In his classic book, The Men Who Killed Gandhi, celebrated writer Manohar Malgonkar, mentions how Veer Savarkar—who in the author’s words was to Hindu Mahasabha what Gandhi was to Congress—was wrongly implicated in the Gandhi murder trial in 1948-49. Malgonkar dropped more than a hint that it was the work of government of the day, or in other words Congress.

(Below are excerpts from the book. The texts in italics are my own; the one in bold letters are the exact page numbers and quotes in the book:)

Why were the police so anxious to implicate Savarkar?

Was it merely that, having failed in their proper function to arrest Nathuram before he killed Gandhi, they were making a bid to save face by raising the bogey of some sensational plot which involved a big leader who, providentially happened to be in bad odour with the government of the day?

Or was the government itself, or some powerful group in it, using the police agency to destroy a rival political organization or at least to destroy a fiercely uncompromising opposition stalwart?

Whatever it was, Savarkar himself was so conscious of these currents, so convinced that the authorities were determined to take him to court as an accomplice of Nathuram, that when five days after Gandhi’s murder, a police party entered his house he went forward to meet it and asked: “So you’ve come to arrest me for Gandhi’s murder?”

Savarkar being made an accused in the Gandhi murder trial may well have been an act of political vendetta. Of course Badge (Digambar Badge, a weapon supplier and conspirator who turned into a police approver)…was most insistent to me (the author) that he had been forced to tell lies, and that his pardon and future stipend by the police department in Bombay depended upon his backing the official version of the case and in particular that, he never saw Savarkar talking to (Narayan) Apte, and never heard him telling them: “Yeshaswai houn ya (Earn glory).”

Many years later on 16 June, 1983, the Poona newspaper Kal edited by S.R. Date, published a report on the subject, which was later reprinted in a volume published by the Savarkar Memorial Committee on February 16, 1989. I quote excerpts from it. It purports to repeat something that Savarkar’s counsel at the trial, L.B (Annasahen) Bhopatkar, a Poona lawyer, had revealed to his friends after he returned to Poona from Delhi in January 1949, after the Red Fort trial was over, and Savarkar found `not guilty.’

While in the Delhi for the trial, Bhopatkar had been put up in the Hindu Mahasabha office, Bhopatkar had found it a little puzzling that while specific charges had been made against all the other accused, there was no specific charges against the client. He was pondering about his defence strategy when one morning he was told that he was wanted on the telephone, so he went up to the room in which the telephone was kept, picked up the receiver and identified himself. His caller was Dr. Bhimrao Ambedkar, who merely said: `Please meet me this evening at the sixth milestone on the Mathura road.’ But before Bhopatkar could say anything more, put down the receiver.

That evening, when Bhopatkar had himself driven to the place indicated, he found Ambedkar already waiting. He motioned to Bhopatkar to get into his car which he, Ambedkar himself, was driving. A few minutes later he stopped the car and told Bhopatkar: There is no real charge against your client, quite worthless evidence has been concocted. Several members of the cabinet were strongly against it (against implicating Savarkar), but to no avail. Sardar Patel could not go against these orders. But, take it from me, there just is no case. `You will win.’ Who…Jawaharlal Nehru?…But why?

They had arrested Savarkar even though they did not possess sufficient evident to do so. To be sure, the mass of papers seized from his house had yielded scores of letters from Nathuram and half a dozen from Apte, but these were disappointingly innocuous. All that they did was to establish the fact that Nathuram and Apte knew Savarkar and held him in great esteem. But this in itself was not enough to satisfy a magistrate that a prima facie case existed so that he could issue a warrant.

This, however, was no more than a technicality (sic), and they got overe it by arresting him under the Prevention Detention Act—one of the most malignant practice of legislation with which the British had armed themselves while they ruled India. Even though Indian politicians of all shades of opinion had persistently condemned the British for this Act, the Congress had been in no hurry to repeal it after the British had gone.

Under its provision, Savarkar was initially held as a `detenu.’ After that they proceeded to build up evidence against him that would enable them to change his detention into arrest, with what could be called `retrospective effect.’

Savarkar was 64 years old, and had been ailing for a year or more. He was detained on 5 February 1948, and remained in prison for the whole of the year which the investigations and the trial took. He was adjudged `not guilty’ on 10 February 1949. The man who had undergone 26 years of imprisonment and detention under the British for his part in India’s struggle for freedom was thus slung back into the jail for another year the moment that freedom came.

The strain of the trial, and the year spent in prison while it lasted, wrecked Savarkar’s health and finished him as a force in India’s politics. (Page 46).