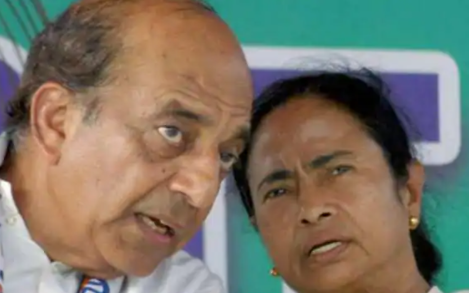 West Bengal chief minister and Trinamool Congress head Mamata Banerjee suffered a blow in the guts today when its stalwart leader Dinesh Trivedi quit the party to add to a series of big names who have parted ways.

Trivedi quit, saying he felt helpless about the political violence in his state of West Bengal.

“The kind of violence that is happening in Bengal, it’s a threat to democracy. I feel very strange sitting here. I think of what I should do. I think of Rabindranath Tagore. Obey party discipline? Of course but I feel stifled. My soul is saying, I sit here and say nothing, what is the point? I resign,” an intense Trivedi said in the Rajya Sabha.

“We are here only for our motherland. I am grateful to my party for sending me here,” he said, adding that he wanted to go back and work for his state. Shortly afterwards, he handed over his resignation to Rajya Sabha chairman and vice president Venkaiah Naidu.

Only yesterday, Trivedi had backed prime minister Narendra Modi’s exhortation in favour of private sector to help India grow globally. Trivedi had said:  “I am personally in agreement with this. The way forward is to let our young talented mind innovate, create and distribute wealth. Pay Govt levies, create jobs. For that, our Govt officers (babus) too, need to encourage the youth.”

“This is unfortunate. I am saddened. It is not good that he has resigned. I knew he was dissatisfied but I did not know he would quit,” said senior Trinamool Congress leader Saugata Roy.

Trivedi was nominated to the Rajya Sabha last year by Trinamool Congress. He was a Lok Sabha MP from Barrackpore but lost in 2019 general polls. He had lost to Arjun Singh, a former Trinamool colleague who had shifted to BJP.

Moments after the news emerged, senior BJP leader Kailash Vijayvargiya told reporters: “Dinesh Trivedi is more than welcome to join BJP. He has taken a year to quit the Trinamool”.

The exodus from Trinamool Congress shows no sign of abating. The initial trickle only intensified after Suvendu Adhikari, a top aide of Mamata, first quit as minister and joined BJP. Some 40 leaders have since quit Trinamool.