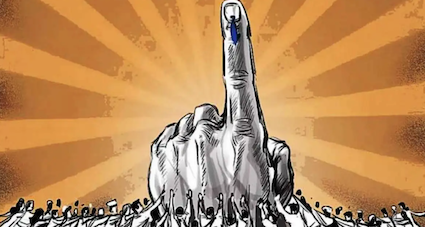 India is a parliamentary democracy.

Only, the Parliament doesn’t function.

Do we really need a Parliament?

But it doesn’t cross the mind of India’s citizens. They elect their representatives who speak for them in abuses, move only to hurl papers and uproot mikes, and assault marshals once they enter the august hall.

Why do we fail to detect such a streak in our representatives when they present themselves at our doors with the sweetest of smiles and most charming manners?

May be we don’t vote for the candidate but for the party he represents.

May be the pretender is nothing but a rubber stamp for party and does as he or she is asked to, that is to appear the vilest, in front of the world.

The anti-defection law in 1985 (the 10th Schedule of the 52nd amendment to the Constitution) hasn’t helped. It stopped individual defections but alongside made him or her a parrot who only recites the line given to him by his party.

Thus out goes his own vow to his constituents; instead, he is one in the chorus swaying to the baton of his masters.

He might have a conscience, he might be ashamed of his conduct, but he stoops to rise in the eyes of his bosses.

The tragedy is, in this political slugfest there are no people.

We the people who stand in queue under scorching sun in midsummer under the mistaken belief that our representative would do just that: to represent us.

But no sooner he is elected, he dumps his people for his party.

He is a sham of a political representative who sells his legislative power to his political bosses.

Often when laws are passed, there is hardly any attendance. Nobody sits through night over a lamp to go through its details.

The drill next morning happens by rote—either it’s to raise their hands in support or to grab some collar in theatrical anger.

Once the House is adjourned, it’s time to do pow-wow, plead petition to ministers, often at the behest of businessmen who are looking to cut a deal with ministries.

There is no motivation to make laws which improve the lot of people. No fear of facing the electorates again whom you promised a moon last time.

No thought that at Rs 2.5 lakhs spent per minute on Parliament, as per a decade old assessment, every three session in a year costs the exchequer—our own money—hundreds of crores every year.

Do we really need such a democracy?

Isn’t it better we elect an executive from two parties, as is the case in the United States, and a judiciary to exercise oversight.

Such a President is not dependent on the strength of his party in the Parliament.

Such a President whose cabinet could include professionals and not just party members.

Such a President who could veto a law passed by the Parliament.

And please don’t blame it on our federal structure in the Constitution.

The United States too has a federal system—indeed each of its State too has its own legislation.

And cut this crap out of autonomy of States too. What do you think happens in our State legislatures? Probably worse than what we witness in our Parliament.

But it won’t happen.

It’s the same script with seasonal editions and we haven’t blocked roads to be heard.

India would remain a soft State, made malleable by actors with their own agendas.

Why, we are not even agreeing to One Election, One India.

As a home can’t function if every member is shouting and pulling in different directions, so can’t a democracy unless an iron hand makes it count.

However, in a real world, it would make India a pariah.

A referendum could bring about this change but then who bells the cat?

It would entail a cost; probably blood on the streets; but the morning after would be democracy in the real sense.