Do you have no shame? Amarinder lashes out at Kejriwal on his fast ‘theatrics’ 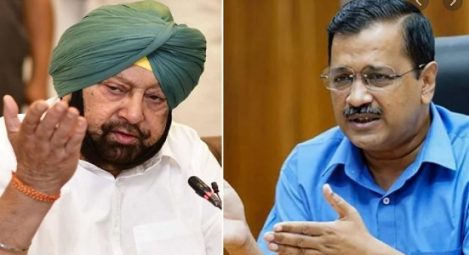 Cornering Kejriwal, the Punjab Chief Minister went on to call the AAP chief a “shameless liar”.

“Do you have no shame? At a time when our farmers are braving the winter cold on the roads outside your city and many of them are dying fighting for their rights, all you can think of is how to make the most of the opportunity to promote your political interests. Instead of doing anything constructive to help the protesting farmers, who are sitting outside your city for the past 17 days to seek justice, you and your party are busy playing politics”

Kejriwal has proved time and again that he is no friend of the farmers, he added.

Captain also trained his guns towards Aam Aadmi Party (AAP), MP Bhagwant Mann, for his accusations that the Punjab government has signed a power purchase deal with the Adani group. In response to his allegations, Amarinder Singh  remarked that the Punjab government has neither signed any agreement with the Adani Power nor is it aware of the private players bidding for power purchase in the state.

“In sharp contrast to the Kejriwal government in Delhi, which had been thriving on Ambani crumbs and had been touting its power reforms under the Reliance-run BSES as its biggest achievement, the Punjab government had neither signed any agreement with Adani Power nor was even aware of the private players bidding for power purchase in the state,” Captain Amarinder said in an official release.

Taking to Twitter, the BJP leader tagged the Aam Aadmi Party chief and said, “this is your hypocrisy.” Javadekar claimed that Kejriwal had promised an amendment to APMC Act in Punjab Assembly elections. He also added that last month, Kejriwal notified one farm law in the national capital.

“Nothing but hypocrisy,” he added.

Arvind Kejriwal is sitting on a day-long hunger strike on Monday, in solidarity with farmers who have given a call for hunger strike to all farmers of the country. He also urged his party leaders to do the same. AAP MP Sanjay Singh has also informed that the party’s Uttar Pradesh faction will also stage a hunger strike across 75 districts of the state.