‘Does Rahul Gandhi know the difference between a dhaniya and methi?’ 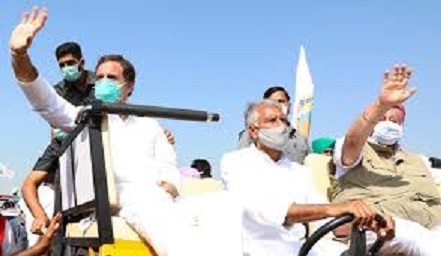 Gujarat Chief Minister Vijay Rupani made a brutal remark on Congress leader Rahul Gandhi for supporting “Bharat Bandh” of Tuesday: “Does he know the difference between dhaniya (coriander) and methi (fenugreek)?”

Congress was at the forefront in issuing a statement in support of Bharat Bandh in which they managed to secure signatures of most of India’s opposition parties to the Modi government.

Addressing a public function in Mehsana, Rupani said Gandhi and his party were indulging in politics by opposing the same set of reforms they had once advocated. “I want to ask Rahul Gandhi if he knows the difference between coriander and fenugreek,” said Rupani.

“In its 2019 election manifesto, the Congress had said it would bring changes in the APMC Act if voted to power and give farmers the freedom to sell their produce outside these markets. Now, when Prime Minister Narendra Modi brings in these reforms, why is the Congress opposing it,” the CM questioned.

“Rahul Gandhi once called a meeting of Congress Chief Ministers and asked them to delist vegetables and fruits from APMC to bring down prices. Now, when we are doing the same to empower farmers, Congress is opposing it. The people want an answer as to why t he party is taking such a stand,” Rupani further said.