Don’t forgive or forget this ‘Deep State’ which echoes Pakistan 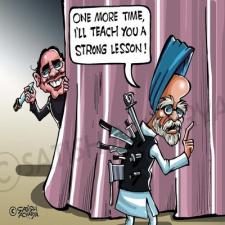 India commanded attention from its citizens in the last two weeks.  In an uninterrupted stretch, Pulwama was followed by counter-attack on JeM in the Kashmir Valley, diplomatic and economic measures, Surgical Strikes 2.0, the Abhinandan saga and renewed shelling from across the border.  A real war loomed.

Since early 90s, Pakistan had followed a very successful yet predictable pattern. Bleed Kashmir endlessly through its terrorists. Next, ensure India doesn’t resort to a deterrent action. Follow it up with more bloodshed. More and more soldiers are killed. The morale of Indian armed forces dissolve; its alienation with its political class grows. Kashmiris are displayed on world forums as victims of Indian state’s brutality. Turn 185 million Indian muslims into a hostile force against majority Hindus and Indian state.

So why didn’t India take any deterrent measure? Why Pakistan was always allowed a free goal? Who made India complicit in designs of Pakistan? And why did India follow Pakistan’s agenda?  These are important questions.  Its’ awareness could save or break our country.

In the three decades of terrorism in India, 10 worst attacks ever happened. But for one on Parliament in 2001, the rest were all under Congress (UPA) rule (the one in Uri and Pulwama have been successfully avenged).  Here is the chronological order, in terms of casualties and damage:

All these attacks were done with impunity. The first step thereafter is to soften the outrage (in wake of Pulwama, it was the fake narrative of how Kashmiris across the country are fleeing!!!). Lutyens Media are the first movers which stick to Mahatma Gandhi and his “an-eye-for-an-eye-would-leave-the-world-blind” morality. Its Indian readers are told that an escalating war between two nuclear-armed nations would cause mayhem; newspapers are splashed with stories of state brutality in Kashmir Valley; the famous “never-say-die spirit” of Mumbai is evoked; “Aman ki Asha” is propped up in narrative; Bollywood starts singing  “terrorism-has-no-religion” etc – all are aimed to assuage the anger. So that the next round of violence could begin. (See the above list of terror attacks: no less than 4 major ones took place in 2008 and what did UPA-1 do: Nothing).

This orchestrated narrative couldn’t have happened without a nexus between political class and media/academia.  One could assume that newspaper barons don’t have the sanctity of news as their uppermost goal. Tangible and intangible benefits could be a priority. Why bite the hands which feed? But what about political powers. Why did they sing in harmony to Pakistan’s tune?

Dr Subramaniam Swamy is on record that Pakistan’s Inter Services Intelligence (ISI) blackmails Indian ministers and their cohorts about their black money in foreign banks. “All the black money is routed through Dubai hawala groups. Since no such transaction happens without the knowledge of ISI or Dawood Ibrahim, that’s why no action is taken against Pakistan,” Dr Swamy said in 2013.

Viewed from this prism, the pattern becomes clear. This “Deep State” in India echoes Pakistan. It doesn’t matter if India goes to pieces. Its’ brave soldiers lose live by thousands. Innocent citizens go up in smoke. Widows and orphaned children bewail.  The country is scarred and brought to its knees. These are the forces which manufacture scare about Hindu extremism (imagine, even 26/11 was nearly plastered on this narrative!!!).

The last two weeks have been truly amazing. Balakot has meant that India could strike deep within Pakistan; that nobody in the international forum—not even China—comes out in their support; that Pakistan won’t play the nuclear-bomb card; even the Islamic identity has not helped as recent OIC has shown which Pakistan boycotted because the invitation to India wasn’t withdrawn. The paradigm has shifted. “Aman ki Aasha” narrative is flushed down the drain forever.

You and I are happy by turn of events of last two weeks. There is a general, all-around respect for PM Narendra Modi. But did you ever hear this gang say so? Why are they unhappy when the nation is happy? In India’s moment of triumph, they have a sense of despair.  Let us hang them out to dry. No point in naming these politicians and journos/academicians.  But we all know them. Never forget or forgive. If they thrive, the terrorism would too.