Dr Manmohan Singh’s UPA: When India all but gave up Siachen Glacier 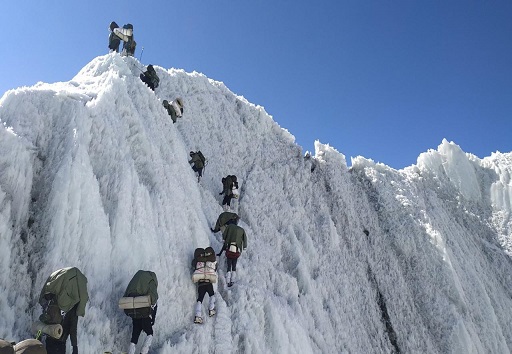 It took a Galwan Valley for the nation to remember that India lost over a lakh square kilometre of its land to Pakistan and China under successive Congress regimes.

Edappakath Ahamed, a minister of state for external affairs in the Manmohan Singh government, had conceded in Parliament in 2012 that 78,000 sq. km of Indian land is in the grab of Pakistan while China has usurped 38,000 sq km. Besides, Pakistan had illegally ceded 5180 sq. km of Indian territory in Pakistan-Occupied-Kashmir (PoK) to China under the Sino-Pakistan Boundary Agreement of 1963. (see image below):

It was also claimed damningly by a former Indian foreign secretary that India was close to diluting its control of the Siachen Glacier before the National Security Advisor (NSA) MK Narayanan in the UPA government stopped the madness.

India controls the 76km long Siachen Glacier, located in the eastern Karakoram range in the Himalayas, It’s part of India’s Ladakh territory since 1984. Pakistani posts are located 3,000 ft below Indian posts on the ridge.

Shyam Saran, in his book “How India Sees The World”, had claimed that India and Pakistan had all but cinched a deal over the issue of Siachen before the process was scuttled by Narayanan.

Saran mentioned that he had worked out a breakthrough with his Pakistani counterpart Riaz Mohammad Khan and it even had the approval of Indian army before Narayanan aborted the deal, overriding the prime minister who was keen to see the agreement go through.

All the finer points, current positions of the two forces, the spots of withdrawal, schedule for redeployment and a joint monitoring mechanism etc had been put in place. All this would’ve been recorded in an annexure to the main agreement and both would’ve had explicit legal validity.

Saran, who had also worked as advisor to then prime minister Manmohan Singh, claimed that the then PM had directed him to obtain a consensus from all key stakeholders. “I did many rounds of consultations, both at the senior bureaucratic and ministerial levels in the ministries of defence, home and finance whose members are part of the Cabinet Committee on Security (CCS),” Saran said.

Then then army chief General JJ Singh and the chiefs of all intelligence agencies had also been brought on board, Saran had claimed. The approval from the CCS was seen as a mere formality. It was to be then put up as a proposal from India at the India-Pakistan Defence Secretary-level talks scheduled for May 2006.

“When the CCS meeting was held on the eve of the Defence Secretary-level talks, the NSA launched an offensive, saying that Pakistan could not be trusted, and that there will be political and public opposition to any such initiative and that India’s military position in the northern sector vis-à-vis both Pakistan and China will be compromised. General Singh, who had happily gone along with the proposal in its earlier iterations, now decided to join Narayanan in rubbishing it,” Saran mentioned in the book.

In the meeting, home minister Shivraj Patil and defence minister Pranab Mukherjee decided to play safe and proposed a deferment of the deal. The prime minister, who was keen on the deal, chose to keep silent. Mukherjee though did step in to support Saran. He pointed out that Rajiv Gandhi himself had agreed to include Siachen in the india-Pakistan dialogue. It thus begs a question if Dr Manmohan Singh was fulfilling Rajiv Gandhi’s dream of giving away Siachen?

Aside from Indian and Pakistani army, the Siachen Glacier region is unpopulated. The region is extremely remote. On the Indian side, roads could go only till the base camp at Dizingruima which is 72km from the head of the glacier.