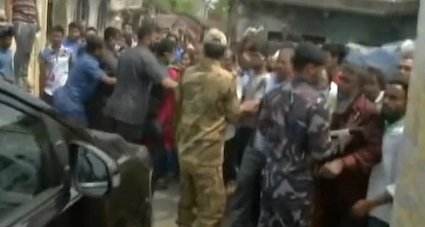 Election Commission (EC) has adjourned polls in the Sitalkuchi assembly constituency in Cooch Behar in Bengal based on initial reports from poll observers.

Five persons are said to have been killed in two separate firing incident across Sitalkuchi after they sustained bullet injuries.

Violent clashes erupted and the Trinamool Congress has reportedly alleged that deaths were caused due to CRPF firing.

“Commission hereby orders adjourning the poll in PS 125 of Sitalkurchi AC, Cooch Behar based on interim report from Special Observers. Detailed reports are sought from them and CEO by 5 pm today”, EC said.

In Hooghly, BJP MP Locket Chatterjee’s car was attacked by locals at polling booth no. 66 this morning.

In visuals shared by news agency ANI, a black sedan, believed to be Chatterjee’s car, is seen pinned down by goons, many of them without masks, shouting and pointing fingers at the car’s occupants.

The 60-second clip showed dozens of people clashing with the police and security personnel, who had to wield riot shields and appeared desperate to push people aside and protect Chatterjee inside the car.

BJP’s IT cell head Amit Malviya tweeted that the day’s violence was the outcome of provocative speeches by Mamata Banerjee. “They also had to divert attention from the news of their strategist conceding defeat last night and hence planned attack on forces.”

Brazen attempt by TMC to disrupt free and fair polls in WB. Recent incidences of violence a result of provocative speeches by Mamata Banerjee. They also had to divert attention from the news of their strategist conceding defeat last night and hence the planned attack on forces…

Prashant Kishor, master strategist of Mamata Banerjee, held a Clubhouse meet with a select few Lutyens Media journalists last night in which he is heard saying that BJP would win assembly polls in Bengal and that many believe Modi is nothing less than a God. Further, he said that there is latent anger against Mamata Banerjee and that Trinamool Congress, and Left before them, have appeased Muslims for 20 years in the belief that support of minority is enough to win polls in Bengal.

The fourth phase of the eight-phase Bengal assembly polls is underway today.