Economic Survey: FM projects growth up to 8.5% for Indian economy 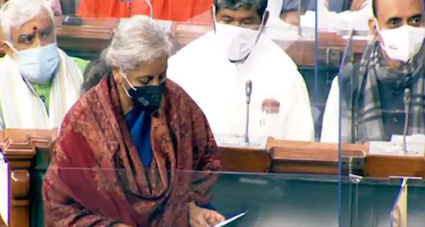 A day ahead of the Union Budget, Finance minister Nirmala Sitharaman presented the Economic Survey, projecting an 8-8.5 percent growth rate for the Indian economy in the 2022-23 fiscal year.

“Growth in 2022-23 will be supported by widespread vaccine coverage, gains from supply-side reforms and easing of regulations, robust export growth, and availability of fiscal space to ramp up capital spending,” said the Economic Survey.

Chief Economic Advisor V Anantha Nageswaran said that the Economic Survey 2022 reflects the four-pronged approach taken by the government to tackle the Covid-19 pandemic. The government has focused on short-term support for the economy, especially to vulnerable sections; while keeping a firm eye on fiscal stability in the medium term.

Principal Economic Advisor Sanjeev Sanyal, while addressing the press, said the agriculture sector, “not surprisingly, was least affected by lockdowns of various kinds. This sector grew in 2020-21 and again in 2021-22. Industrial sector, on other hand, did go through a contraction and now it is about 4.1 percent above pre-pandemic levels,” he stated.

Sanyal also added that India now has $636 billion worth of forex reserves, one of the highest in the world, and equivalent to 13.2 months of imports.

The survey also noted that India has become the third-largest startup ecosystem in the world after the US and China. The government recognized over 14,000 new startups in 2021-22, against 733 in 2016-17. With this, the total number of recognized startups in the country has surpassed 61,400. The survey said India had a record number of 44 startups turning unicorns (companies with over $1 billion valuation) in 2021.

Apart from this, the Centre recognised over 5,000 new startups in Delhi-NCR  alone, between April 2019 and December 2021, making it the new startup capital.

The survey also stated that Indian railways will emerge as one of the most important sectors in India’s national growth.

According to the survey, the National Railway Plan “envisages the creation of a future ready railway system that is able to not only meet the passenger demand but also increase the modal share of railways in freight to 40-45% from the present level of 26-27%.”  Sitharaman will present her fourth budget tomorrow, on February 1 and some analysts feel that the finance minister may announce major relief to taxpayers. While Indian corporates are expecting some key announcements which will enable them to reset their growth agenda, individual taxpayers are expecting some more disposable income in their hands to invest and consume more.