‘Even Aryabhatta and Aristotle would bow to Rahul Gandhi for his knowledge’: Dr Harsh Vardhan 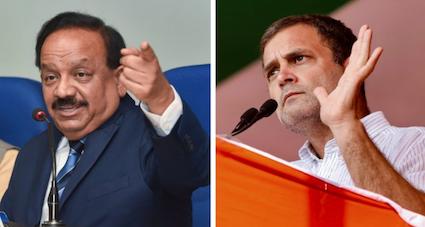 Former Congress president Rahul Gandhi has often been found spreading misinformation on vaccines and vaccination.  In one such latest attempt, he took to Twitter and questioned the decision by the Narendra Modi-led government to double the gap between the doses of the Covishield Covid-19 vaccine.

Before we get into the details of this latest episode concerning Rahul Gandhi, let’s look at how Union health minister Dr Harsh Vardhan has chosen to reply to it. Dr Vardhan said even Aryabhatta and Aristotle would bow in front of Rahul Gandhi for his knowledge. However, the agenda of spreading misinformation on vaccination won’t work.

Rahul Gandhi had quoted a report by Reuters that said the government had increased the gap without the agreement of the scientific group, citing the names of three members of the National Technical Advisory Group on Immunisation (NTAGI) advisory body.

The Reuters report mentioned by Gandhi scion reportedly named three members- M.D. Gupte, a former director of the state-run National Institute of Epidemiology, his colleague Mathew Verghese, and J.P. Muliyil, a member of the seven-strong Covid working group who allegedly opposed the idea of increasing the gap.

Mathew Varghese had also echoed the same, “The group’s recommendation was only for 8-12 weeks.”

However, it is worthy to note that the working group has 14 members, and by inference the majority of the scientists agreed to increase the gap between the two doses.

By inference also, one could deduce that the “disagreement” relates to 12-16 weeks extension only. The one of 8-12 weeks everyone had agreed to.

Further, as per a scientific report, the vaccines given at longer intervals of 12 weeks returned 81% efficacy against 55% for six weeks and 76% for 3-12 weeks.

Another study, also published in Lancet, pointed out that the administering of single doses helped in reducing the transmission.

The chairman of NTAGI, N.K. Arora, himself came up with the comprehensive clarification and informed that the government decided to expand the gap to up to 16 weeks on the basis of scientific evidence.

Meanwhile a report published in February’2021 stated that, in “Oxford-AstraZeneca vaccines, top effectiveness is achieved when a person receives two doses a number of weeks apart.”

According to the report, the initial trials involved 17,178 participants from the U.K., Brazil, and South Africa. After initial trials, the researchers further found out that vaccines given at longer intervals of 12 weeks returned 81% efficacy against 55% for six weeks and 76% for 3-12 weeks.

According to Dr. Merryn Voysey, the lead statistician at the Oxford Vaccine Group and a lead author of the study, “This latest analysis confirms our previous findings of the higher efficacy of a low-then standard-dose regimen. However, with additional data available, we have found that the enhanced efficacy and immunity may be partly driven by the longer interval between doses that was common in this trial group.”

“This further supports the relationship we have found between vaccine interval and efficacy in those receiving two standard doses, which is the preferred regimen because there are more data to support its use and because it is simpler to deliver a vaccine program when the same vaccine is given for both doses,” she added further.

Ontario’s Ministry of Health also backed the claim in their study.

All this has been collated by a twitterati Alok Bhat in a long thread, arriving at the conclusion that higher intervals between doses help achieve the two objectives of (a) breaking transmission; (b) higher efficacy against infection.

Slamming Rahul Gandhi, as well as the Reuters journalists, Krishna N. Das and Devjyot Ghoshal, Bhat tweeted: “I understand compulsion of @RahulGandhi to share misleading info as his modus operandi of past 17 months is singularly focused on ensuring deaths of more Indians in pursuance of his family’s fetish to rule India. But I fail to understand the motives of @Krishnadas56 and @DevjyotGhoshal.”

I understand compulsion of @RahulGandhi to share misleading info as his modus operandi of past 17 months is singularly focused on ensuring deaths of more Indians in pursuance of his family’s fetish to rule India.But I fail to understand motives of @krishnadas56 & @DevjyotGhoshal

Further, the Union health minister Dr Harsh Vardhan has affirmed and tweeted that “the gap between administering two doses of Covishield has been taken based on a transparent manner based on scientific data…It’s an unfortunate that such an important issue is being politicized.”