Even in times of Covid-19, Opposition isn’t willing to let Parliament function 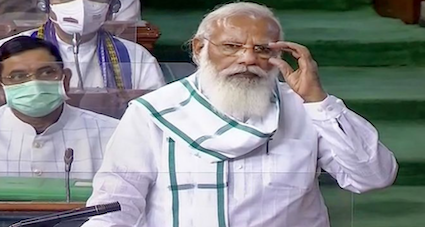 The predicted spectacle of Opposition disrupting the proceedings of the Parliament was witnessed on the first day of Monsoon Session which led to the prime minister Narendra Modi claiming that with so many OBCs, Dalits and women in the new cabinet, he thought there would be an “atmosphere of enthusiasm.”

I thought that there would be enthusiasm in the Parliament as so many women, Dalits, tribals have become Ministers. This time our colleagues from agricultural & rural background, OBC community, have been given berth in Council of Ministers: PM introduces his new Ministers, in LS pic.twitter.com/Hf7JIbhFFB

Slamming the Opposition for their sloganeering, PM Modi said, “Coming from farmer families, MPs coming from rural environment have become ministers in large numbers, it should have been a pleasure to welcome them. But perhaps the women of the country, tribals, OBCs, sons of farmers became ministers, some people do not like this thing, so they do not even allow them to be introduced.”

Modi was joined by Lok Sabha speaker Om Birla in condemning the Opposition for dragging the “dignity” of the parliament down through their disruption.

Monsoon session would transact business for 19 days till August 13. Ahead of the session, Modi had told media that he hoped MPs would respond in a peaceful manner.

PM Modi said, “The pandemic has engulfed the world and humankind. That’s why we want that there should be a constructive debate regarding the pandemic in Parliament. It should be discussed on priority. We hope to get suggestions from honourable MPs so that there can be innovation in the fight against the pandemic. Shortcomings can be addressed. And everyone can move ahead together.”

Vaccine is given in ‘baahu’ (arms), those who take it become ‘Baahubali’. Over 40 cr people have become ‘Baahubali’ in the fight against COVID. It’s being taken forward. The pandemic has gripped the entire world. So we want meaningful discussions in the Parliament over it: PM pic.twitter.com/YjrKUGQAqB