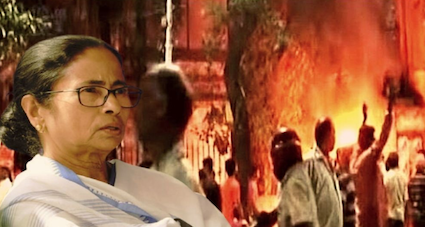 Note it down in your diary or frame it in front of your desk next time the Lutyens Media speaks for “human lives” and “democracy” or pose as force against “fascism” and “dictatorship.”

Calcutta High Court has observed that “people have been killed” and even “minor girls have not been spared sexually” and all this while the Mamata Government was in “denial mode” and her police was slapping the cases against those very who came forward to file a complaint.

Yet, Indian Express, that “journalism of courage”, hasn’t even mentioned these facts this morning; Times of India has made a snippet of an insertion on front page; Hindustan Times or The Hindu you find it out for yourself and ThePrint and TheWire have kept a clean slate in their digital house of disrepute. And oh, yes, I forgot NDTV, India Today and Outlook. Need I dwell on them?

And be sure you won’t hear any noise till next hearing on July 13 and even then it’s coverage would meet the same shameful fate. They would go to any length so it doesn’t register in readers mind, as they have done for last seven years, even as a State government ridicules Centre, its Constitutional representatives, defies judiciary while tales of communal killings, rapes, scams and scandals abound.

These are not guardians of truth; rather a private army enrolled for promotion of a certain kind of “democracy.” Deaths don’t bother them; Lives-in-flight even less; they are not the kinds who look at their minor girl and shiver if the same could’ve happened to her if she was in any little hamlet of Bengal of today.

These minor Bengal girls, “brutally assaulted sexually”, don’t stir their heart like it did for Kathua not long ago. You won’t find Swaras and Sonams and Deepikas in angst. Rahul Gandhi isn’t logging on to twitter; Priyanka Gandhi is not on street; Prashant Bhushan and Harsh Manders have had a brain fade.

When shops are looted, heads are tonsured, heads are hung from a tree, scraggly parents are dragged by the hair and it doesn’t strike their conscience, you look at these beasts who come to our drawing rooms each morning with the best of manners.

Violence can’t survive without lies; and lies could only defend itself behind the wall of violence. Truth thus loses traction—Google and you won’t find any mention of Calcutta High Court’s damning interim order. Scan the timeline of twitter of Mahua Moitra and Derek O’ Brien and its empty of any reference; all the custodians of morality are hiding behind a plain cotton sari; in fear of a pair of slippers.

There is no burden on their hearts that this State government has denied post-poll violence all along; and that these editors never sent a team which could have saved dozens of lives. There is hardly any image of this long night of knives; hardly any OpEd then, now or in future I can promise. A State government hasn’t saved its own people from being victims; a State police appeared to side with the perpetrators but these editors who normally fill their pages with the plight of Rohingyas and tears of migrants are silent.

It’s now upto the Courts and Centre to heal this wound on our democracy. No less the lives destroyed deserve justice. Or admit we are a banana republic. Winning elections don’t mean the losers have to part with their lives. Democracy without checks and balance is Dictatorship by other means. Media is an obstacle but we the citizens could go around it by keeping each other informed and the topic in public consciousness—the very thing they don’t want to happen on Bengal. I am not here to speculate what’s their compulsion in this servility but in a material world, material gains usually hold the key.