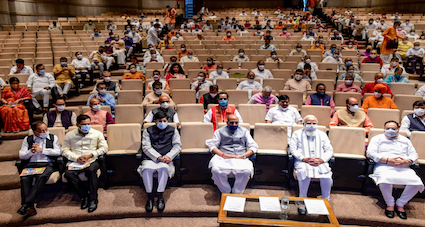 Prime Minister Narendra Modi attacked Congress for causing a deadlock in the Parliament .He asked the BJP MPs to intensify their public outreach to “expose the Congress party before the public and the media”.

Attacking the Congress at the BJP Parliamentary party meeting, PM Narendra Modi said that the Congress stops the House to run and they did not even attend the all-party meeting that was called on the issue of vaccination.

PM Modi was referring to the Congress’ boycott of last week’s all-party meeting to review the Covid-19 situation in the country, adding that the party had also prevented others from attending.

PM Modi has attacked Congress earlier also for its “irresponsible and unfortunate” behaviour. He also had to cut short his speech due to slogan-shouting opposition leaders when he rose to introduce new ministers on July 19.

It must be mentioned that government has been trying to conduct the parliament in this session, however, Parliament has failed to transact any business due to continuous uproar by the opposition parties.

Last week, PM Modi also asked opposition to “ask tough questions, but allow the government to reply”. Even yesterday, the government has reached out to the opposition to break the week-long deadlock in parliament set off by the Pegasus scandal. Parliamentary Affairs Minister Pralhad Joshi has met Congress’s Manish Tewari and Supriya Sule of the Nationalist Congress.

However, proceedings in both houses have been disturbed by opposition protests, leading to chaotic scenes. While Congress is not ready to hear government’s call, the Trinamool Congress MP had even showed unruly behaviour by snatching the paper from Union IT Minister Ashwini Vaishnaw’s hand as he was giving a statement on the Pegasus scandal.

According to ANI, the Rajya Sabha was adjourned five times on Monday.

Rajya Sabha chairman Venkaiah Naidu has also expressed concern over the disruptions, saying 90 members of the House are being denied opportunities to raise issues of public importance even after their notices were admitted.