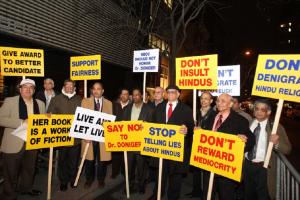 The other day an Indian Express editor sat down to write an edit on his computer with a chuckle.

Tripura Chief Minister Biplab Deb had backed his claim on “internet-in-Mahabharata” with a chiding to those “narrow-minded” who ridiculed their own civilization and swooned over everything Western.

Commies, by grounding if not funding, follow the first commandment of ensuring the culture of a country gets diluted and their “revolution” gains sufficient wind. After seven decades, even as the door is being shut on them in India, the dog’s tail, however, remains crooked as ever.

This pipsqueak thus chooses the moment to mock millions of Hindus with various references to their epics, wondering where is the “Facebook page” of a Dhritarashtra; why did Duryodhan and Yudhishtir at all physically gamble when they could have done so “online”; and Ganesha ought to have used Ved Vyasa’s smartphone to get help from speech-to-text technology.

This twerp must not have known that his computer can’t function without binary numbers which were first described by the Vedic scholar Pingala in his book “Chandahsastra” in the 2nd century BC.  That if he has millions in his bank account, it couldn’t have been possible without ancient Indians making the distinct contributions in the notation and decimal system, not to mention the use of zero.

If the editor had gone beyond his toilet paper origami, he could’ve found out that the works of Newton Leibniz or Gregory (ever heard of them?) is today known as “Madhava-Newton” series after the 14th century founder of the famous Kerala school of mathematics.

Next time when he swoons over his new-age newspaper office building, he ought to reflect how shapes and sizes of plots wouldn’t have been possible without trigonometry being formulated by Aryabhata.  How the eclipse Commies are deservingly suffering world over, could have a physical link to the lunar and solar eclipses which Aryabhata discovered.

If he had lifted his head over from his Gangsta Rap Colouring Book, he would have known that the circumference of the earth; and that it rotates around stationery sun was a discovery by ancient Indians.

If he hadn’t been knitting with dog’s hair, and noticed the changing season, he could’ve thanked Varahamihira for his contribution in the field.  The whippersnapper could’ve added to his advanced knowledge of treachery and subterfuge had he known the contributions of Shulbasutras in the arena of geometry, algebra and calculus. If he hadn’t been in the basement and working on divide theory, one could have told him about Kanad and the atomic theory he devised around 2600BC, centuries before John Dalton was born, for the “uncuttability” of matter.