Farm Bills: ‘If Rahul, Priyanka could identify crop by its leaves, I would leave politics’ 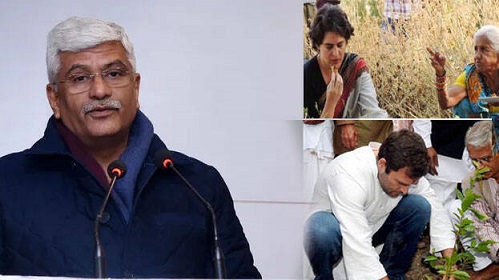 Union minister Gajendra Singh Shekhawat trained his guns towards Congress leaders Rahul Gandhi and Priyanka Gandhi for their protest against Agriculture bills. He has accused them of ‘misleading’ the farmers.

Taking a jibe at the Gandhis, the Union Minister of Jal Shakti said Rahul and Priyanka will not be able to differentiate between the yearlings of goat and sheet. He further targeted them and added if the Gandhi scions are able to identify the crop by their leaves on agricultural land, he would leave politics.

Earlier, Madhya Pradesh Chief Minister Shivraj Singh Chauhan also took a swipe at Rahul and said that the Wayanad MP doesn’t even know whether onions are grown inside the soil or outside.

“He (Rahul) hardly knows how a chili grows, upward or downward, and has no idea whether onion grows above the ground or below,” Chouhan said.