Farmers’ protest again next month: And why I would welcome it 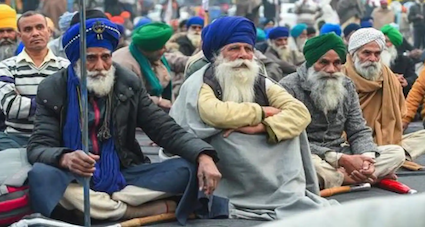 How I wish the Farmers Protest 2.0 begins next month as they have promised to do.

We the citizens would remind me of my uncle Beni who first married Sita, then moved his in-laws and is now reduced to being an unwelcome visitor in his own sprawling ancestral property.

The household work which is now his destiny allows him no time to attend to his business; he can only tiptoe around galleries lest his mother-in-law wakes up; his brother-in-law’s little kid shrieks and his sister-in-law reaches for door lest her lover is spotted. His driver Radhe Shyam now earns his salary by gushing in neighbourhood about the saints who employ him.

We the citizens, likewise, would put up with our roads blocked, our businesses ruined, our tax-payers money gifted as unwieldy MSP and yet told by our Radhe Shyams, the Media, about how farmers’ are braving Delhi’s bitter cold and scorching summer, how the Liberal world is moving heavens, its parliaments and Congress breathless, at those shrunken faces and nonagenarians, and hundreds dead, unseen as is the case in Ukraine these days.

Our mother-in-law—when have they spoken in favour of we the unfortunate grooms—is the Supreme Court who shows no sense of shame that the committee it forged, and the report it submitted, was an eyewash to fool us. It had no interest in seeking a solution, indeed its cover-up amounts to betrayal of ordinary souls it professes to protect, surrendering the State into the hands of goons, now that the committee’s report is in public domain which tells us that the three repealed farm laws were mightily good for farmers and for India’s future.

We, the Uncle Benis, are mortally afraid to ask our mother-in-laws (The Supreme Court) do we see a pattern in how fleeing Hindus post-poll in Bengal; or the sham of a committee on PM’s breach of security in run-up to Punjab polls, amounts to justice being a mockery in India. That we the people, at the bottom of the pyramid, are no better than ants, faceless, lifeless, just numbers who come under a boot or a bedside book.

Then there is our father-in-law, the Government, who means well but lacks the spine to stand up for the right. It spent months on men and resources to draw up a plan which could free up India’s farmers from money-muscle-might of Mandis, Rich Farmers and colluding politicians. The plan that promised private investment to diversify crops, revive the soil, save water, herald technology, improve supply chains, modernize storage etc.

Yet the father-in-law killed its own dove, terrified if Sita-Radhe Shyam-and his wife collude and throw him out from the impending auction of five rooms in which he eyed four and which could be his if he could flush his plan down the drain, with apology on lips and cameras in tow.

Not that our mother and father-in-laws, and our Radhe Shyams, are unaware that their machinations are not helping the very house, the very roof under which they exist. Yet their selfish motives succumb to creeping termites who feed on wood, their feces indeed germinate millions more, before the edifice turns powdery and can’t stay on its feet.

Our very own who we trust, like uncle Beni who gave away his keys to those he had faith in, don’t protect us. We are those useful idiots who could be fooled into giving them high rooms with attics while we sleep on the floor. These betrayers give a damn if the ground floor is run over as long as the flame doesn’t reach the top floor. They would feed the monsters as long as they don’t take the stairs to upper rooms.

Now we the Uncle Benis could be unfettered from our very own if we don’t cooperate with our votes, our hours, our eyes and ears. If we refuse to be mere canon-fodders. If we tell the neighbourhood what goes inside the house in the name of “democracy”, “human rights” and guarantee of “lives and livelihood.”

If the neighbourhood still believes that farmers’ issue is legitimate, that rich farmers, politicians (our Badals-Kejris-Mamatas-Pawars—Gandhis), Khalistanis have no axe to grind, that farmer leaders avoiding the committee or government lest they have to explain the reasons for their agitation is a never-mind case, and now MSP demand is a legitimate cause, they could either google and know the truth or here and here are mere two links I offer to show why MSP would destroy India’s agriculture. Why do you need links though when the SC committee of proven experts themselves have dumped MSP?

All of this would continue as long as we the Uncle Benis don’t find a way to reach the upper rooms and shame our protectors-on-paper. Till it happens, we remain their suckers. We might learn to enjoy our misery and welcome Protest 2.0.

Why one, there would be annual farmers’ protest on Delhi’s gates.  And it would be for anything but for farmers.