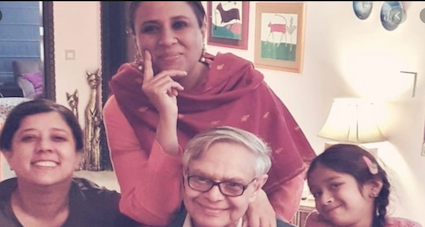 Earlier this week, senior journalist Barkha Dutt shared the tragic news of her father SP Dutt’s demise on Twitter who was an Air India official, passed away after battling with the coronavirus disease.

While she thanked the frontline workers who helped her family during this crisis-” to all the doctors at Medanta, nurses, ward staff, security guards, ambulance drivers, my gratitude for trying so hard,” she also expressed her anguish saying that her father conditioned worsened because of poor administration and lack of proper facilities.

“It got delayed because there is no green corridor for the ambulances in the city in the Capital even now. By the time we reached the hospital because the oxygen (cylinder) had failed/faltered, his levels had fallen precipitously. He had to be taken into the Intensive Care Unit (ICU). He never made it back,” she said in an interview with CNN.

However, as she claimed that the ambulance did not have proper provision for oxygen for the patient, the young political channel, The Pulse India, reached to the ambulance driver to find the other side of the narrative.

Sonu, the ambulance driver, informed them that the oxygen in the ambulance was working perfectly fine and that he helped the patient to the best of his capability. He said the oxygen cylinder was full and Barkha Dutt herself had checked the supply. The audio conversation has been released by The Pulse.

The ambulance driver recounted that the journalist had inquired about the oxygen supply in advance. According to him, she had checked both the mask and the flow of oxygen before taking her father to the hospital. He even said that Barkha even questioned why there’s a large oxygen cylinder in the ambulance.

“She interrupted me during the journey and repeatedly asked me to check the oxygen supply. I assured her that it was working fine. We had reached the hospital without any issues. We were accompanied by two of her vehicles. The patient’s caretaker was also with him. I had even stood outside the emergency department for 15-20 minutes. The patient also got down from the ambulance without any difficulty,” Sonu claimed.

Later, he also clarified that Barkha questioned him as to why there was no oxygen mask for her patient. To which he informed her that several patients prefer to use their own but even if they did not have one, the ambulance has one.

Sonu told that he had even demonstrated that the oxygen cylinder was indeed working. He even claimed that Barkha Dutt was lying and that if she really was telling the truth, she would have taken a photograph then and there.

Additionally, while Barkha Dutt continuously seems to question the working of oxygen cylinders, her sister Bahar Dutt claimed that there was no oxygen in the ambulance in the first place!

While nobody questions the fact that there isn’t any shortage of oxygen and people are not suffering but as a reader, it also becomes important to question why she chooses to present only a part of the narrative  during such a sensitive time?