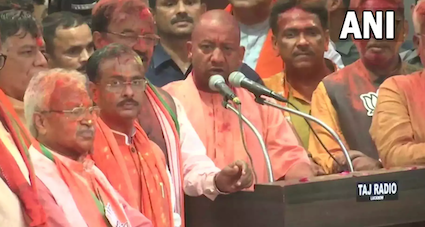 Incumbent Chief Minister Yogi Adityanath on Thursday thanked the people of Uttar Pradesh and senior party leadership for the massive victory of the ruling Bharatiya Janata Party (BJP) in the assembly polls.

“Everyone had their eyes on UP, given the vastness of the state. I am thankful to the people for making us win with the majority…Under PM Modi’s leadership, we will be forming govt in UP, Goa, Manipur, and Uttarakhand,” said CM Yogi Adityanath while addressing party workers at the BJP headquarters in Lucknow.

“The 7-phase election in the state was conducted peacefully. It sets a great precedent,” CM Adityanath added.

CM Yogi Adityanath and other BJP leaders also played Holi and celebrated the party’s victory in the Uttar Pradesh election at the party office in Lucknow.

Asserting that the people of UP have voted for nationalism and good government, CM Adityanath urged the party workers to stay focused and keep working for the people’s welfare.

“Amid the fervor, we have to stay focused…When we were fighting COVID, they (Opposition) were conspiring against us…By making us win people have once again voted for nationalism, good governance. It’s our responsibility to continue working on these issues,” he said.

Meanwhile, according to the latest trends of the Election Commission of India as the counting of the votes is underway, the BJP has won 144 seats and is leading in 130 constituencies. The Samajwadi Party has bagged 47 and is leading on 77 seats, while Congress managed to grab one seat.

In the last assembly polls in the state, the saffron party bagged 312 seats, while SP won 47 seats, Bahujan Samajwadi Party (BSP) 19 and Congress could manage to win only seven seats. The rest of the seats were bagged by other candidates.