Forests in Northeast are a victim of wilful encroachers: Elephants have nowhere to go 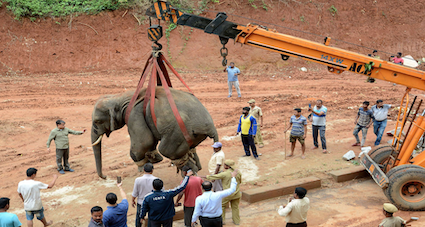 India’s northeastern region — comprising Arunachal Pradesh, Assam, Manipur, Meghalaya, Mizoram, Nagaland, Sikkim and Tripura — is a unique biodiversity hotspot and the large swathes of forests in the region is an abode for the Indian elephants. The region, however, is currently losing canopy cover at an alarming rate.

In a report, a government-appointed committee that was tasked to assess the status of the Amchang Wildlife Sanctuary on the eastern fringe of Guwahati city examined the pace of deforestation in the elephant landscape of the Northeast, covering 42,000 square kilometers in Assam and Arunachal Pradesh. In an 11-page detailed report, the three-member committee headed by Chief Conservator of Forest Hem Kanta Talukdar mentioned how the green cover of lesser Himalayas in Northeast is undergoing rapid changes and the deteriorating condition of the sanctuaries due to increasing deforestation, earth-cutting and encroachment.

Assam is the leader where encroachment of forests is concerned. An estimated 3,396 sq km of the 300-plus reserve forests in Assam has been encroached. More than four lakh people have settled illegally inside 20 wildlife sanctuaries and 271 reserved forests in the state, while in Sonitpur district alone 892 sq km of forested area is under encroachment.

Man-animal conflict is a result of rampant destruction of forests. Animals stray into human habitations in search of food and space. Chandrapur, Satgaon, Panjabari, Khanapara and Narengi military station areas in the city have been most vulnerable to depredation by elephants. The shrinking forest apparently has not only increased their occurrence in residential areas but also resulted in an increasing number of deaths of elephants on railway tracks or risk of death for raiding crop fields. A resident at the military station pointed out that elephants often enter the complex at night to drink water at a pond. “They leave without causing any harm. There have been occasions when elephants have also consumed food from the kitchens in the military station,” he said.

The Amchang wildlife Sanctuary, situated on the East of Guwahati city in Assam that has a population of more than 50 elephants has recently been the territory of high disputes as the area has become a common place for encroachers and illegal occupants. The northeast governments have been unable to check this and several environmental activists and non-governmental organizations had approached the courts with public interest litigation for stringent measures.

The BJP-led government in Assam started an eviction drive in Amchang Wildlife Sanctuary, Kaziranga National Park, Garbhanga Reserved Forest and Dibru-Saikhowa National Park since 2016 with an order from the Gauhati High Court but those eviction drives had to be stalled due to public protests and litigation by some organisations.

In Amchang Wildlife Sanctuary, about 78.64 sq km area is allegedly encroached by an estimated 864 families. The Assam government, acting on a Public Interest Litigation (PIL) by an environmental organisation, Early Birds, carried out eviction drives around Amchang Wildlife Sanctuary in Kamrup district since August 25, 2017. At that time more than 400 families were evicted by the government four years ago but later on the action was halted following an order from the court. However, last year again notices were served to many families for allegedly constructing houses in the sanctuary.

Meanwhile, the government has established two committees under the environment ministry- one committee to examine the rehabilitation issues and to provide relief measures for the people evicted. The other committee to conduct a joint survey for demarcation of forest land and revenue. In order to guard the area, the government has also made a petition to prepare a “zonal master plan” for the eco sensitive zone  to mitigate the factors that facilitate the encroachment activities.