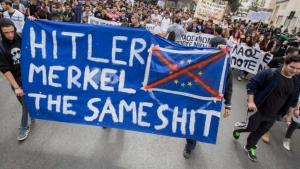 The sand of hourglass has passed. Greece has stayed in Europe. Anti-austerity referendum has been trashed. Creditors have been assured of payouts. The United States of Europe remains. But very few have read you out the fine print.

Greece’s biggest creditor Germany, who has a share of 57 out of 240 billion euros of Greek debt, have now turbo-charged the neo-Nazis and Adolf Hitlers in the continent. By insisting on austerity, Germans have once again isolated themselves in European history. They have looked anti-people at a time when the left parties are to the fore. By disregarding the Greek referendum of “no” to austerity, they have threatened the survival of Greek prime minister Alexis Tsipras and his left government of Syriza party. If Tsipras goes, the growing fascist party, “Golden Dawn,” wins hands down. Experts rate the present deal as worse that 1919 Treaty of Versailles—and we know what shape Europe took thereafter.

Two of Syriza and Tsipras supporters, Podemos party of Spain and National Party of France, would only turn more radical. National Party of Marine Le Pen already enjoys 25 percent support of French voters. Millions more would cross over, now that masses don’t appear to figure in European Union’s scheme of things. It’s conceivable that Le Pen is hoisted to power in France in 2017 elections.

Podemos, with 20 percent of vote share, is already the third largest party in Spain It could be the kingmakers in next elections. Populist parties of Denmark and Finland have already raked up huge share of voters in general elections. British and Scottish elections have shown similar trends. The anti-austerity mood has spread. The anti-capitalism forces are to the fore. Socialist parties all over Europe have increased their vote share by 50 percent since the 2008 recession.

Tsipras couldn’t have betrayed the referendum which said “no” to austerity. So he has declared he would go after the rich in order to meet the conditions of third bailout. In that referendum, 80 per cent of rich had said “yes.” The poor, in contrast, overwhelmingly had said “no.” But we all know rich clubs can’t win mass referendums. From an economic issue, the Greek Crisis has turned into a Class War. There is a mass resentment against austerity. An average European realizes that in this deal struck on Monday, its’ the common man who would shoulder the brunt of burden.

And what about the Germans? They have turned an economic crisis into a nationalistic agenda. If Greece can have a referendum that says “no” to austerity measures, Germans could have their own referendum which disapproves it. Chancellor Angela Merkel faces a double whammy of dealing with German parliament and her own people. Germans are already telling Greece to “get lost.” The general mood is: we Germans work hard and have to carry Greeks who are lazy.

Greeks have drawn out their daggers too. Deputy finance minister Dimitris Mardas wants Germany to pay up $303 billions of Second World War debt, including nearly 12 billion dollars of forced loans that Nazi Germany made the Bank of Greece lend to the wartime German occupiers. The rest of the claims relates to wartime atrocities of the Germans.

It’s a very painful narrative. Fascist Italy had invaded Greece from the north at the start of the Second World War. Greek troops fended them off. Hitler’s Nazis now came to the aid of his ally, sweeping down the Balkan peninsula in 1940. Since Germans had come without any provisions, they took whatever they could. Over 250,000 Greeks perished due to lack of food and famine in the harsh winter of 1941, according to historian Mark Mazower in his book, “Inside Hitler’s Greece.” The Greek economy was stripped bare. It came to a grinding halt.

The Greek currency Drachmas became worthless. The official price of bread rose from 70 to 2,350 drachmas. Only “other” currencies worked—cigarettes, wheat and olive oil etc. Drachmas were printed with gay abandon with German approval—from 24 million in circulation in June 1941 to 109.8 million a year later; to 4 billion by January 1944 and spiralling to 68.8 billion by that summer. Corn, 2.75 pounds in weight, cost 25 million drachmas! The present German disdain for Greek economy thus appears supremely ironic.

Hold your breath and look at Germany’s own example. Post Second World War, in 1953, Germans had a crushed economy. They went to the Allied victors and said if they wanted Germany to stand up to Soviet Union, they must take care of its debts. Consequently, 50 percent of vey high debt figures were erased. Other 50 percent were stretched to repayment in 30 years. Germany thus escaped the noose. Today they are engine-house of Europe. They want to deny Greece what they themselves got in the 50s.

Sure Greece has been bad in managing its own currency. They have defaulted and devalued several times. They have overspent and corruption and tax evasion is rampant. But if over-borrowers are at fault, so are the mechanisms of over-lenders.

We are perhaps witnessing the most significant moment of European history since Second World War.