Get off Galwan; Naku-La Pass is the new India-China flare-up zone 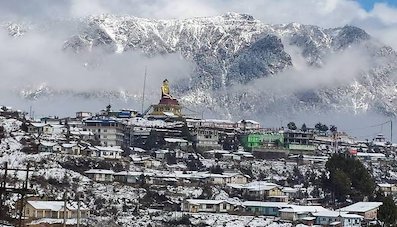 Media hasn’t stayed put on the violent skirmish between Indian and Chinese soldiers at the Naku-La Pass in north Sikkim on January 20. Even though it appears that the scene of theatre has shifted from Ladakh to India’s East.

It was Naku-La Pass only where last May India and Chinese soldiers were engaged in one of the deadliest and longest standoff between the two countries in decades. But then Galwan Valley happened. Some 1600kms west of Sikkim.

But now it sees Naku-La Pass is again becoming a flashpoint. It could spread along the long nearly 3500km, most of it disputed, between the two countries. After all, we do know that Chinese have built a village in Arunachal Pradesh.

It does beg a question what stops these two countries from settling their borders once for all. But such is the great mountain rainge, the physical geography to go with the political and cultural landscape of the region that this dispute shows no sign of ending soon. It’s a dispute centuries old.

It began in the 1840s when a clutch of British officials—surveyors, generals and administrators—tried to fix a border between India, Russia and China’s still expanding empires. They took the “watershed principle”, an accepted norm. Watershed is the land area that drains into a watercourse like a river, lake or aquifier. The McMohan Line was drawn on this principle only. McMohan Line is a demarcation between Tibet and India’s northeast region.  But such is the complex geography that it limited surveying and would-be borders remained undefined at the time of India’s independence in 1947.

But empires such as British could avoid the fallouts. Not the nation-states of our times. Each began asserting its sovereignty on its Himalayan periphery. The tension has remained intense over decades and includes a bitter war in 1962.

Beijing has been claiming Arunachal Pradesh since 2006. It calls the region as “South Tibet.” Of course this is a hogwash. In order to make it appear one of Tibetan identity, they have cooked up Tibetan names for the subdivisions of Arunachal Pradesh. It includes the Tawang Valley, the gateway to Dalai Lama’s great escape of 1959 from his homeland. It wants India to cede Tawang in border negotiations.

Arunachal Pradesh is important to China for various reasons. One, its size—three times larger than Taiwan. Two, its’ resource rich. It also uses its pressure tactics for India to cede its claim on Aksai Chin plateau. That was the reason why China withdrew from Arunachal Pradesh it had invaded in 1962 war but retained its territorial gains in Aksai Chin plateau. Aksai Chin is infinitely more important as its the only passageway between its rebellious regions of Tibet and Xinjiang.

But with Aksai Chin in bag, China is now ratcheting up the Arunachal theme. It’s insisting that at least Tawang, if not China, must become the new Taiwan. That it must be “reunified” with the Chinese state.

Never mind that the Dalai Lama is public in stating that Arunachal Pradesh, including Tawang, are not traditionally part of Tibet. Tawang is a Monpa tribal area. Its tribal people were never citizens of Tibet. The boundary separating the territory from the adjoining Tibetan region is a well-accepted dividing line. Like some other Himalayan communities win India, the Monpas are Tibetan Buddhists, belonging to the Gelukpa sect.

It’s important to remember that China had made no specific claim on Tawang before it waged a war against India in 1962. But now, going with its maximalist stance with neighbours, it’s dragging everyone into a border dispute.

So the current issue as Naku-La Pass has the potential to flare up.

Arunachal, like Ladakh, is a series of mountains through which the mighty Tsangpo-Brahmaputra river barges through. The watershed principle in eastern Himalayas did yield success, compared to in Ladakh, there is no single water-parting line surveyors could follow.

Another difference is that in the west, China and India fight over an uninhibited desert. Here, in the east, things are different. This is a very varied land. Its a home to animists, Hindus, Christians, Tibetan Buddhists. Tawang hosts the biggest Tibetan Buddhist monastery outside Chinese-held Tibet and is the birthplace of the sixth Dalai Lama.

But China is relentless. It has invested for decades in infrastructural control over Tibet and the Aksai Chin. It presently feels secure in western Himalayas. It’s East which they don’t find to their liking. Though India keeps claiming Aksai Chin, its basically cartographic. It has no precious resources and has limited strategic benefits for New Delhi. Importantly, it has no permanent inhabitants.

Arunachal Pradesh, as said, is strategically important, resource rich and is historically inhabited by independent people. It’s blessed with eastern Himalayas powerful rivers which is potential lifelines for two energy-stressed, water-scarce giants. Both want to press ahead with their dam building. Both also worry about who would succeed the Dalai Lama, now that he is ageing. Anyone who controls Tawang, controls Tibetan Buddhist Himalayas. It would throw up the next Dalai Lama.

Thus stakes are high. The two giant nations of Asia want to control territory, want to control its inhabitants. People could shift allegiance depending on how a confrontation grows.

So India is doing good in massing forces on its Ladakh region. But Arunachal Pradesh is a bigger worry. And worthy of bigger attention.