Grand Opposition Alliance? You must be joking 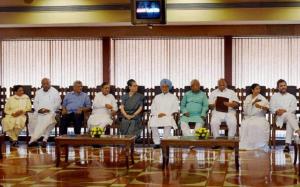 Indian Express ran a front page story on Tuesday with the screaming headline: “Maya to Party: Back SP again in coming bypolls…” Times of India, the same day, ran the headline “Maya won’t support SP in bypolls.” One of them for sure is lying.

It doesn’t take long to detect who’s lying. The Times of India story is based on a press statement by the BSP. It’s exact words are: “BSP will not activiate its cadres in any bypolls in future, the way it did it in Gorakhpur and Phulpur.” The backdrop of these developments is the upcoming bypolls in Kairana and Noorpur assembly seats in UP.

Yet Indian Express has completely ignored the press statement. It’s telling its readers—in line with it’s primary function of propaganda abroad—of a communion between the two “warring kingdoms” even though a schism has occurred. (Meanwhile, it’s gleefully jumping up and down in concocting a schism between Reserve Bank of India and the government as its second front page lead).

So create schism where none exist and bury a schism where it does exist!!! Who bells the cat? Surely not your sanctimonious Editors’ Guild or Press Council of India!

Mayawati may change her mind and support SP in UP bypolls in coming days. But that’s a different matter altogether. The issue for the moment is that Indian Express willfully spikes a story which shows not all is well between “babua and bua.” It also ignores Mayawati chiding an “immature Akhilesh Yadav” for SP’s devious role in the recent Rajya Sabha poll.

Meanwhile Indian Express, which catches even a sneeze of the “piddi”, completely ignores the words of Ranjan Chowdhury. The West Bengal Congress chief has plainly said that “Mamata Benerjee is an opportunist leader.” Chowdhary has claimed that Mamata can’t be trusted as anti-BJP voice. He has cited the instance of Mamata siding with Telangana Rashtriya Samithi (TRS) which in turn supports BJP inside the Parliament. He has accused Ms Banerjee of inviting BJP in West Bengal in the first place, “who espoused the policy that BJP was not untouchable;” and during her regime “hundreds of RSS shakahas were opened.” Chowdhury further says: “In future, if she thinks she will gain more benefit by allying with BJP, she will do it.”

Tellingly, Chowdhury says: “Mamata is aspirational and wants to become the PM. She does not express her desire in words but her actions make her ambition amply clear.”

So there you are: BSP doesn’t trust SP; Congress doesn’t trust Mamata; one part of the left says join Congress, the other says don’t.  And we have Congress declaring in plain words—in the words of Chowdhury—that all “the regional parties want is to ensure that they are able to extract their pounds of flesh whoever comes to power. Or, if they are lucky somebody can become a Chandrashekhar or Deve Gowda (as PM).”  Chowdhury’s words betray the Congress anxiety in case Rahul Gandhi misses out on Prime Ministership.

So this is the bunch of opportunist opposition who don’t care a hoot about what happens to you or me or to this country. All they want is to extract their “pounds of flesh,” as Chowdhury says. Yet our English mainstream media is swooning over the Grand Alliance in offing.

I mean how shameless could they really get!