‘Greatest humiliation in history of US’: Trump on Afghanistan 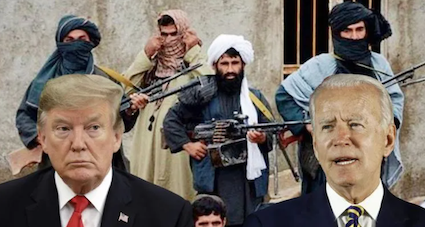 Former United States president Donald Trump slammed President Joe Biden’s decision to withdraw the U.S. from Afghanistan, saying it is “the greatest foreign policy humiliation in the history of the United States of America.”

“Biden’s botched exit from Afghanistan is the most astonishing display of gross incompetence by a nation’s leader, perhaps at any time,” Trump said at a boisterous rally packed with his supporters near Cullman, Alabama.

He said recent developments in Afghanistan are a ‘major failure’ of the current US administration’s foreign policy.

The ex-president continued to train his guns, mentioning that Biden’s exit  is the most astonishing display of gross incompetence by a nation’s leader, perhaps at any time.

“It didn’t have to happen. All he [Biden] had to do was leave the soldiers until everyone was out, our citizens, the weapons, and then you bomb the hell out of the bases and say ‘bye bye,'” Trump said.

He also said the quick takeover of Afghanistan would not have happened if he was still in office.