Greta Thunberg and other puppets: How do you mark them out? Never forgive, never forget 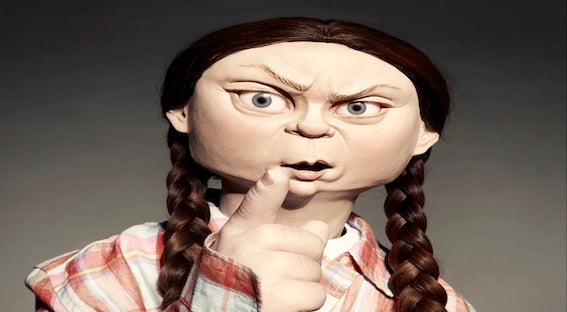 It’s worth readers’ time to visit the twitter timelines of below:

And see how they have reacted to Greta Thunberg, the child that she is, inadvertently releasing the document of Global Conspiracy against India and then deleting it.

Rent-a-cause activist @GretaThunberg shared a doc on how the international opinion shall be manufactured through street protests, misinformation & ignorance.

There of course are hundreds others but I don’t want to bore you to death.

Some of these voices should assure you. But if you don’t find any outrage from most, or even acknowledgment of Conspiracy against India, you must think how much are they speaking for India, for its citizens, for you and me.

It’s one thing to differ on farm laws, have sympathy for farmers, oppose Modi government on its measures, find police repressive, action initiated as biased etc.

But it’s a completely different thing when you don’t bristle in anger on the Document that calls for coordinated swamping of social media for events day in advance, storm Indian embassies around the globe, mention Kashmir, Hindu supremacists, CAA etc, drag in Adani-Ambani when the Docket, all this while, is purportedly on protesting farmers.

Is it not an attempt to stage a coup-by-other-means on a democratically elected government, topple Modi government, throw India in chaos and anarchy?

A situation which could lead to us being dragged into war, unprepared, by China and Pakistan?

Are they not aware of the economic costs? That rest of India doesn’t have any Singhu, Tikri, Ghazipur border? And yet a few thousands are keeping the Executive and Judiciary to ransom?

That farmers are not specifying their angst; just repeal of laws; that neither judiciary’s committee nor Centre putting laws on hold for a year and half is cutting ice? That a religious flag atop Red Fort was a non-event?

What do we make of politicians and journalists, academicians, activists and celebrities when India invaded or a Civil War raging or India forced to cede Khalistan doesn’t concern them.

That India could still become a puppet in the hands of imperialists and globalists like it was under colonialism? That our true independence would be short-lived?

If such forces are compromised or bought over; or let’s say they can’t comprehend the threat, does it make them any less dangerous?

The chances are all this would die down. They would brainwash us with constant lies and propaganda so this Conspiracy against India would water down, like the memory of massacres of Chitpavan Brahmins, Kashmiri Hindus or Marichjhapi massacre has become. When the conspiracy to turn 26/11 into Saffron Terror doesn’t matter what chances a Docket has?

That we could’ve ended up without Rafale; that Balakots are doubted; Covid-19 tackled isn’t acknowledged; that such highs don’t have anniversaries, should tell us why India’s gains are a loss to them.

The fate of India, frankly, is on our hands. In us citizens. Modi government can override this “deep state” only up to a point. If they bring out force, globalist forces would force them to bring military on our Janpaths. Their sanctions could ruin our economy. When mere spikes on roads is seen as fascist nature of the Indian state, just imagine if a rifle is ever lifted.

It’s we citizens who could control the narrative. One of course would be to come out and show our anger on street. The other would be just to dismantle their hold over us: Boycott the newspapers; unvote the politicians; unfollow handles; shun their films; dump their books.

Is it too much to be responsible? To watch out for forces whose only strength is our indifference? Would India enslaved again; partitioned again not matter?