Gupkaris unravel in one broad Modi stroke: Each scrambling for survival first 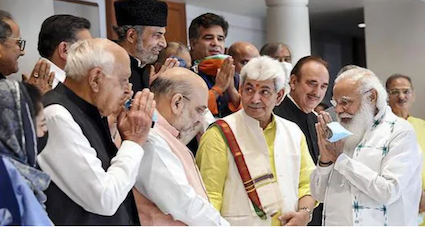 If the All Party Meeting (APM) called by Prime Minister Narendra Modi on Jammu and Kashmir in Delhi made anything crystal clear, this was it. There was absolutely no question of going back to pre-August 5, 2019, status on major issues like Article 35-A scrapping and restatement of Article 370. Even if statehood is restored to J&K some day, Ladakh is going to stay a separate entity.

The People’s Alliance for Gupkar Declaration (PAGD) was formed on the premise that these parties could together work effectively for restoration of so-called special status J&K enjoyed. In one fell stroke, PM’s meeting has demolished any fond hopes they harboured that the BJP may be willing to negotiate on this issue

At the meeting itself, different regional parties of Kashmir adopted very finely nuanced positions on Article 35-A, 370 etc. When Mehbooba Mufti tried to raise the issue of these articles, she was interrupted by Muzaffar Beig of People’s Conference (PC) who told her that it amounted to contempt of court. Mehbooba, like Beig, is a law graduate, but she didn’t have the wherewithal to contradict the latter. Till some months ago, Beig was with the People’s Democratic Party (PDP) headed by Mehbooba.

Altaf Bukhari of the Jammu Kashmir Apni Party said that restoration of statehood and early elections will take J&K forward. The stance of the Congress, conveyed through veteran Ghulam Nabi Azad, was “statehood first, elections’’ later. CPM’s Yusuf Tarigami, spokesperson of PAGD, seemed crestfallen as he admitted that he was not very sure of the days ahead. Omar Abdullah articulated his position much better as he opposed delimitation going on in J&K as he quoted the example of Assam. Incidentally, delimitation was also to take place in Assam but it has been given up for now.

It indicates that Omar and others are clear in their minds that in the new 90-member legislative assembly, the Jammu region is likely to have more political weightage. Earlier, the Jammu region had 37 seats and Kashmir 46 seats in the assembly. This gap of nine seats always gave Kashmir an upper hand and political advantage, vis a vis Jammu. The gap, in all probability, will narrow down significantly. Will the new assembly have 45 seats each in the two regions? .

The old order with Kashmir in a dominant position is all set to change as Modi has pressed the reset button and the Gupkaris can do nothing to stall this. Of course, except making some noises here and there.

We need to ask one question here. Will this APM prove to be the second major step towards unravelling of the PAGD? It seems so. The first was the DDC elections which found Sajad Lone walking out of the alliance. The stakes sure will be higher when it comes to assembly elections whenever they happen.

From 1999 to 2002, Mehbooba worked assiduously to work against the NC, once considered invincible in Kashmir. By October 2002, the NC had been reduced to 28/87 seats, from 54/87 it had scored in 1996. In 2018, the BJP walked out of the coalition government it had formed with the PDP. Apni Party and People’s Conference are now doing to PDP what it had done to NC once. Mehbooba must be acutely aware of that and could find no better cause then “talks with Pakistan’’ as a talisman to ward off her prima donna position. Not that it seems to be working as she loses more ground in Kashmir.