Hanging my boots as CM, but will continue to work for the party, says Yediyurappa 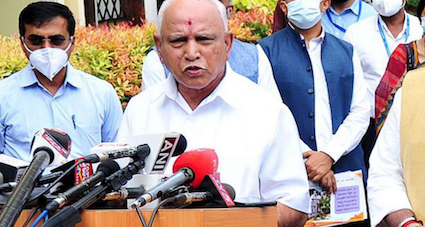 “It has been an honour to have served the state for the past two years. I have decided to resign as the Chief Minister of Karnataka. I am humbled and sincerely thank the people of the state for giving me the opportunity to serve them,” BS Yediyurappa said in a tweet.

“I thank PM (Narendra) Modi, Amit Shah and JP Nadda. They gave me the chance to rule as Chief Minister despite being over 75. I had decided to resign some time back. I thought it best to resign today as we mark completion of two years in this term,” he told reporters.

Yeddyurappa took oath as Chief Minister of Karnataka after the dramatic collapse of JDU and Congress government in Karnataka in 2019. 18 rebel leaders had quit the alliance government and later joined the BJP.

When asked about speculation of him being appointed as a Governor, Yediyurappa said, “There is no question of becoming a Governor. I will work for the party. Even when (late) Atal Bihari Vajpayee had asked me to join the Union Cabinet, I had declined.”

He said, “I just want to thank the (Lingayat) seers who supported,” urging them to support the next Karnataka CM as well.

“Nobody pressured me to resign. I did it on my own so that someone else can take over as Chief Minister after the completion of two years of government. I”ll work to bring BJP back in power in the next election. I’ve not given name of anyone who will succeed me,” Yediyurappa added.

Meanwhile, BJP national general secretary in-charge of Karnataka and Rajasthan, Arun Singh, is slated to arrive in Bengaluru on Tuesday to stand in as a central observer. He could be accompanied by Union Minister Dharmendra Pradhan.