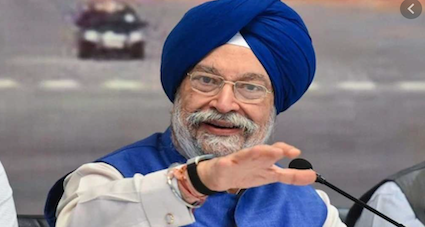 Congress leader Rahul Gandhi on Friday attacked the Union government over the Central Vista project, terming it a “criminal wastage” and asked the dispensation to focus on people’s lives.

“Central Vista is criminal wastage. Put people’s lives at the centre — not your blind arrogance to get a new house,” he said on Twitter.

The redevelopment project of the Central Vista — the power corridor of the country — envisages a new triangular Parliament building, a common Central Secretariat and the revamping of the three-km-long Rajpath from the Rashtrapati Bhavan to India Gate and new residences for the prime minister and the vice president.

Hardeep Singh Puri, India’s Union minister for housing and urban affairs, ripped this argument apart in a series of tweets. As per Puri, only projects for new Parliament building and rejuvenation of Central Vista avenue has been awarded at an estimated cost of Rs 862 crores and Rs 477 crores.

GoI has allocated nearly twice that amount for vaccination! India’s healthcare budget for just this year was over â‚¹3 lakh crore. We know our priorities. pic.twitter.com/uNlnxv7s58

Puri further tweeted that Congress and its allies are splurging on a “new project reconstructing an MLA hostel in Maharashtra and building a new legislative assembly building in Chhattisgarh.

While Central Vista is not new, see Congress’ hypocrisy.

Congress & its allies are splurging on a new project reconstructing an MLA hostel in Maharashtra & building a new Legislative Assembly building in Chhattisgarh. If this is fine, what is the problem with Central Vista? pic.twitter.com/7buqpuFRN2

Maharashtra, a state where Congress is sharing the power with Shiv Sena and NCP, has floated a tender seeking bids for the redevelopment of MLA hostel Manora at Nariman Point at an estimated cost of Rs.900 crore.

The MLA hostel comprising two towers is expected to be completed in three years. While one hostel will comprise one 42-storey tower, another will have 28-storey tower with 675 flats in total. Other facilities include gymnasiums on the terrace, meeting  and conference halls, waiting halls for MLA visitors, a canteen and area for other recreational activities.

Tweeted Puri: “ They want to distract people from monumental governance failures in their states by spreading lies. So they indulge in cheap politics despite knowing this project creates direct and indirect employment for thousands of skilled, semi-skilled & unskilled workers in these times.