Has Rahul Gandhi conceded to China’s claims on Arunachal Pradesh? 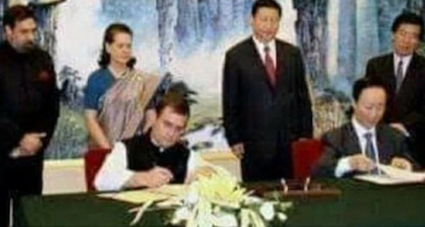 Does North East not exist for Rahul Gandhi? Has he given a free pass to China and its claim that Arunachal Pradesh belongs to our bigger neighbours?

All hell has broken loose after the Congress party leader mentioned: “From Kashmir to Kerala, from Gujarat to West Bengal, India is beautiful in all its colours.”

It has got the ante up of most of eight NorthEastern states and news agency ANI has reported that at least a thousand sedition cases would be filed against Rahul Gandhi in coming days.

China has long been eyeing Arunachal Pradesh and NorthEastern states are  only now weathering insurgency of decades through development in recent times.

It also lends credence to a general impression that NorthEastern states was neglected for decades under the Congress rule as Tripura’s chief minister Biplab Kumar has asserted.

Assam’s chief minister Himanta Biswa Sarma, a beta noir of Congress, who recently stirred up a controversy by equating Opposition questioning surgical strikes with “Did-we-ever-ask-for-proof-of-whether-you-are-Rajiv-Gandhi’s-son-or-not?” quip of his own, wasn’t the one to let go Congress leader on this issue.

Tweeted Sarma: “India is far beyond just a union. We are a proud Nation. Bharat cannot be held hostage to your tukde tukde philosophy. What is your problem with Nation, Nationality and Nationalism? And hello- beyond Bengal, we North east exist.”

Besides the chief ministers of Assam and Tripura, the one of Manipur—N. Biren Singh—also was livid at Rahul Gandhi implying NorthEast as not part of India. He questioned: Who’s dividing India?

Tweeted Singh: “It baffles me when a senior @INCIndia leader ignores the existence of North East India in their statements. When the existence of this region is not even acknowledged, how is Congress asking for votes from the people of Manipur for the upcoming election? Who’s dividing the Nation?”

Pratima Bhoumik, Union Minister of State for Social Justice and Empowerment, and who belongs to Tripura, said there is no break in patter in Congress ignoring the NorthEast states.