Has the Hindu push back begun? Is sense of persecution gaining ground? 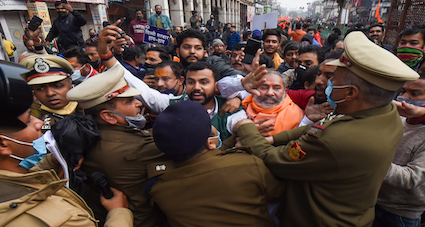 Has the Hindu push back begun?

Outcry, so far, were putting a lid on provocative ads and libellous free-to-air movies. Now the gathering storm is flinging back our Enforcers with baton.

Indian judiciary, and governments, didn’t want people to sell, buy or burst firecrackers. But nobody paid heed and the reverberating sound, all night, must have tossed the Enforcers in the bed.

Rules, when they stop being just, ignite rebellion. It’s true of families as it’s of State. Citizens rose in the case of Jallikattu: They couched it as cruelty against animals. But it didn’t make sense since millions of animals are hacked every year to the call of religion or taste and it’s deemed par course.

They viewed Sabrimala as a case of untouchability. It didn’t make sense for the tradition is limited to women of certain age only. Far worse gender bias exists in the other religion. You shook their pillars and they have been sent back to the review room.

So it is with firecrackers now as it could be next time a draconian call is made on Durga visarjan, Kumbh Mela or Kanwarias while a blind eye is reserved on Bakrid or Christmas.

India’s judiciary, and State, would’ve to appear even-handed. You can’t claim to be Secular if one set of religion is privileged on their schools, customs and places of worship while the other is subject to whims and fancy of dyed-in colonials who appear our brethren.

This will of people has blown to wind the “Namaz-in-public” in Gurugram and the model would gather wind in rest of India if the authorities are similarly culpable.

When people sense everyone is arrayed against them, and that they are at the edge of a cliff, they push back. When you are peaceful but shown as a murderous mob; when your faith is fanaticism; your books glorify your murderers and your heroes as if they never existed; when your wards and kin struggle for admission and jobs while others are under the umbrella of reservation; you sense a persecution.

A few enlightened then rise and counter narratives which begins to have a domino effect. For instance:

The propagandists then dig their own grave when they scream that

It all then comes together and begins to make sense to Hindus.

They talk, they hear, they read: That’s how all Pagan religions were finished. They first destroy their festivals or appropriate them; and when the culture dies, so would the Pagan religion.

And they lose no moment to shame your traditions. See this very horrible video below, mocking Deepawali, which must have involved a fair spend on actors, script and technicians. It’s deliberate. And it’s an agenda.

India is in the throes of violence. We are on edge. Something or other could snap. Adorning language won’t help if adjudicators are not fair in heart. People have seen through the game; things are not adding up. This is all heating up. Not just lives, India’s institutions are losing footings: They were chosen to be referees; not be the players themselves.