Hathras: Eyewitness says brother and mother present when victim was lying on the field 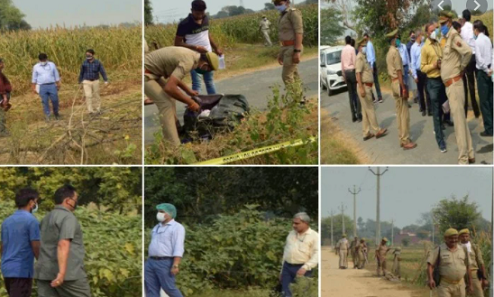 In a surprising development in the Hathras case, one of the eyewitnesses has revealed that the victim’s family was present on the field and stood silently when the victim was screaming and lying on the field.

Vikram Singh, the eyewitnesses in the Hathras case, in an interview with Aaj Tak made a revelation that he was working on the farm when he heard the screams of the victim and when he reached the spot the girl was lying on the ground with injury marks on her neck.

He also added that the victim’s mother and brother were also present there, standing alongside the victim.

Singh said he immediately ran away to inform other people of the village.

However, when he returned to the spot, the brother wasn’t there and the girl was still lying on the floor with her mother standing nearby, said Singh.

Singh also mentioned how the mother of the victim has asked him to bring back the victim’s brother from home but he refused to come and said he’s waiting for other people to join and would come with them.

A team of CBI officials has arrived in Boolgarhi and visited the crime spot. The team has also interrogated the family members of both the accused and the victim.

The team has taken over the other crucial documents from the police in connection to the Hathras case.

Meanwhile, the state government has asked for the installation of CCTV cameras in the village to keep an eye on the activities.