Hathras victim’s family leaves for Lucknow; due in front of High Court bench 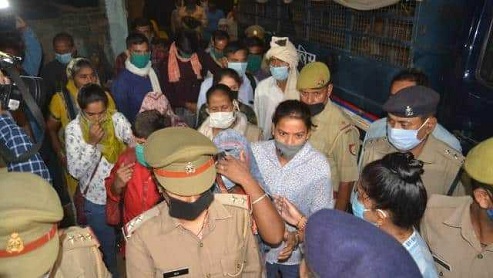 The family of a 20-years-old woman who was allegedly raped and fatally injured by four men in Uttar Pradesh’s Hathras district left for the state capital Lucknow—some 380km away–this morning and will appear before the Lucknow bench of Allahabad High Court.

The woman died at the Delhi Safdarjung Hospital last month. The early morning pictures released by news agency ANI showed the family accompanied by a number of policemen.

Anjali Ganwar, Sub Divisional Magistrate assured that proper security arrangements have been made for the family and “The district magistrate and superintendent of police are also accompanying us”.

“There is sufficient security for the victim’s family. The local police are in touch with the family and nearby villages. Officials have been conducting peace meeting in the nearby villages and appealed to them not to pay attention to the rumours.”

The Lucknow bench of Allahabad High Court had summoned top government officials to court. The division bench of Justice Rajan Roy and Justice Jaspreet Singh has ordered Uttar Pradesh additional chief secretary, state police chief, and an additional director general of police to appear before it to explain the incident. The bench also ordered Hathras district magistrate and superintendent of police to appear to brief the court.

After the request of the Chief Minister of Uttar Pradesh, Yogi Adityanath, the rape case is now being investigated by the Central Bureau of Investigation. RK Gaur, spokesperson of CBI informed that they have already registered a case against prime suspect Sandip Singh.