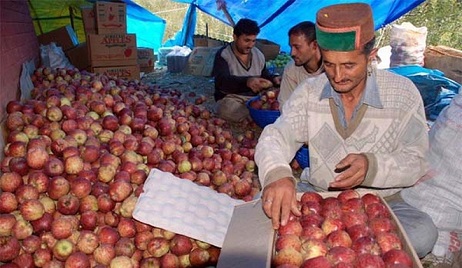 Amidst the ongoing protests regarding the agriculture bills, the apple growers of Shimla have presented a much-needed perspective to an otherwise chaotic situation. Apple growers of Shimla said that private apple procurement centers in the district have helped them to earn more by eliminating the middlemen.

Talking about the development, a farmer, Layak Ram mentioned that while earlier they had to move to Delhi to sell apples, now with private companies entering the market, they directly sell their products to the center.

He said: “ I gave them 12,000 crates of apples last year and around 10,000 crates this year.” Unlike earlier times, they did not have to spend money on greasing officials, laborers, commission, etc. “Earlier there was a lot of exploitation because of monopoly. Our labour costs are saved as we have contracted out our lands. We are very happy because we earn more now. The Adani group has helped us,”

Orchard manager Manjeet Singh Dhillon told that the Adani group is procuring apples from growers since 2006.  He stated that their focus is on improving the income of farmers. He further added that last year they had a production capacity of 18,000 metric tonnes and now they have made it to 22,000 metric tonnes.

“This year we bought 50 percent more apples than last year. The rates were higher so the growers got more money. Around 17,000 farmers are connected with us today. They are earning more these days and taking care of the education of their children,” he added.

Dhillon also informed about how quality is their primary focus and they even have a rejection label of 12% which is known to growers. There’s a team of specialized experts and scientists that provide all the services and facilities to growers about new technology and help them to produce apples with which they can even compete in the international market.

“The growers get their earnings based on the colour, size, and weight of the apples. We are bringing in new technologies to help the growers meet the quality standards.,” he added.

He also emphasized that 90% of the workforce in orchards include the local people, thereby providing them employment opportunities to live a better life. He added that the new technologies are now being employed to help farmers meet quality standards.