Hinduphobia: Doniger and her sins of omission are legendary 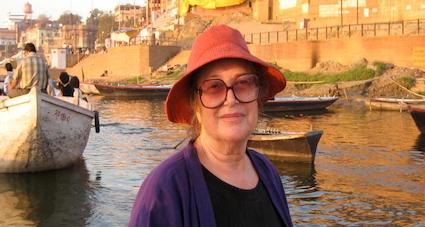 (HInduphobia in academia is the work of a few Indian and Western scholars which has spawned an industry. Here we reproduce an insight from an independent scholar, Vishal Agarwal, which he shared with IndiaFacts. This is the second and last part of the series. The first could be read here).

Coming back to Wendy Doniger, he picks one of her books, “Alternative History of Hindus” and states how chapters filled with distorted history about India and Hinduism from her book are used extensively in the schools and colleges of America as study materials.

What makes the issue is that even the ‘facts of history’ are not seen not in the total history of India, but are highlighted or suppressed from Doniger’s sectarian standpoint. The book claims to speak from the standpoint of all those who have been victims of the Brahmins or high caste Hindus. In short, for Doniger, the primary reality of Hindus is binary. For her, there are two Hinduisms, one of the upper castes and another of the lower/oppressed/ dalit castes. Is this alternative history, then written to boost the evangelists who are claiming to free Indian Dalit Hindus from their oppressors? Is this book looking upon all Hindus or is it shouldering the burden of speaking for the few subalterns who it claims cannot speak?

Throughout the book, Doniger analyzes revered Hindu Gods and Goddess using her widely discredited psychosexual Freudian theories that modern, humanistic psychology has deemed limiting. These interpretations are presented as hard facts and not as speculations. Doniger makes various faulty assumptions about the tradition in order to arrive at her particular spin. In the process, the beliefs, traditions and interpretations of practicing Hindus are simply ignored or bypassed without the unsuspecting reader knowing this to be the case.

She follows a pattern of pornographic description of Hindus and hate mongering and that too in a not-to-so-subtle way. According to Doniger, the concept of a “sex-addict” is introduced into the Valmiki Ramayana by Lakshmana calling Dasaratha kama-sakta, which she defines as “hopelessly attached to lust.”

Clumsily written, each chapter is a shocking and appalling series of anecdotes which distort and misrepresent Hinduism and the history of India and Hindus. Cited below are only a handful of quotes along with our understanding and interpretation

CLAIM: It is claimed that the entire Harappan culture had a population of 40,000!

CLAIM: Gandhi’s commentary on the Gita (a sacred Hindu scripture) was titled ‘Asakti Yoga’ (translated as the science of deep attachment).

COMMENT: The title of Gandhi’s work is ‘Anasakti Yoga’ (trans. Science of non-Attachment).

CLAIM: Gandhi’s last words were Ram Raheem and the Hindu fanatics changed it to ‘Hae Ram’

COMMENT: The last words of Mahatma Gandhi were “Hae Ram”

CLAIM : The book claims that the Ramcharitmanas was written in Varanasi.

COMMENT: Both modern scholarship as well as tradition accept that the work (or at least most of it) was written in Ayodhya.

CLAIM: The author alleges that in Rigveda 10.62, it is implied that a woman may find her own brother in her bed!

COMMENT: The hymn has no such suggestion. It is offensive to suggest that the sacred text of Hindus has carried this information.

Her claims about Ramayana were even more offensive. She has said that Lord Rama hated his brother Bharat for stealing his kingdom and that is why he helped Sugriv in killing Bali. She didn’t spare Sita and said she spent many years in Lanka where the actual truth is Lord Rama and Sita along with Lakshmana already completed 13 years in forest and she lived in Lanka for about 11 months.

In Doniger’s own words, she is “taking pieces of the Ramayana and putting them together” to come up with this far-fetched explanation.

But, one cannot play connect-the-dots with various scenes from a vast text such as the Valmiki Ramayana, stripping out the proper sequence and removing the contextual background of the critical passages, and then call it a valid textual interpretation.

This shows that the author is not an authority on the subject as she is not able to understand the deep meaning of Sanskrit verses or Indian concepts. These cast serious doubts about the authors integrity as a researcher and ability to interpret accurately.

For her, Mt. Abu is in Gujarat and Kanpur and Kannauj are the same cities!

In one of the interviews, where Aggarwal was asked if they ever tried to have a word with Doniger on these facts and other contents of the book,  he said she exhibits the real tone of deafness when it comes to portraying history.

“I and others have tried numerous times in the past to have a dialogue with Doniger, Courtight, Kripal and others. But, in their arrogance, they have made statements like, “These people are ignorant and unqualified, and are not worthy of our time.” In other words, Doniger and her students have been very dismissive of their critics and have persistently refused to engage in a dialogue with them.” he had said.

Her hateful propaganda does not end there. She continues to target the Brahmin and uses 19th century Christian hymns to form the base of her accusations.  According to her all our core Hindu teachings in spirituality like Prapati and Advaita are borrowed from Islam and Christianity whereas the fact is that these doctrines itself are older than these entire religion!

It is totally irresponsible for such a prominent professor, whose career is built on writing about Hinduism, to stereotype and vilify the entire Hindu culture

As a scapegoat tactic to discredit her critics, Doniger plays both the sex card and the race card, without offering any evidence for being discriminated against on the grounds of her gender or her race. But her critics have been concerned not with her gender or race but only with the content of her scholarship.  Race and sex bias are the “cards” Doniger uses to distract readers who are unfamiliar with the details of the substance of the critiques against her.

Moving forward, Aggarwal talks about how Doniger argues that Hindu ‘megalomania’ for temple building resulted from Muslim destruction of some Hindu temples. In other words, because the Muslims destroyed some of the Hindu temples, the Hindus went on a building spree.

If Doniger’s argument is accepted, Hindus should thank Islamic rulers for the destruction of their shrines. The truth is that in northern India which experienced 500 years of Islamic rule (1201-1707), few historical temples of any beauty remain. In contrast, temple architecture of some beauty does survive in southern India, the region that escaped long Muslim occupation.

She also tries to justify the large-scale persecution Hindus under Muslim rule.

She has claimed repeatedly at several places in her book that there were no Hindu temples during the Indus valley civilization or the Harappan culture. The professor asserts that during an earlier period, Hindus persecuted Jains and Buddhists and destroyed their shrines.

However, the credible historians have emphasized that destruction of temples by Muslim rulers was very widespread where as the temple destruction by Hindu ruler were very incidental and rare.

Agarwal  skilfully brings her pattern to front in which she states Hindus as bad and Muslims as good people. She has always presented Hindus as one who does the mistake and Muslims were completely good. She even went on to say the only influence Hindus had over Muslims was bad.

But it is to worth note that she very conveniently misses the point that there are facts available where it can be seen how Muslims used to capture Hindus and convert them to Islam.

She opines that Harihara and Bukka, the founders of the Vijayanagara Empire that saved Hindu culture in  south India, double-crossed the Delhi Sultan when they reconverted to Hinduism but the truth is the brothers committed apostasy as they had been imprisoned and forcibly converted to Islam, and immediately reverted to Hinduism when they were 1000 miles away from the Sultan, under the influence of a Hindu ascetic.

She sees temples as the “symbol of oppression” and the gardens created by Mughals as the “valuable gifts” to India.

Imagine all these errors in just one book and she has written several like them. Not only this, she has even taught more than 5 dozen PHD students of Indology who are now  working as professors and lecturers of Hinduism.

The other unfortunate thing is she has attained a goddess like demeanour among the so-called progressive liberal Indian Hindus who have started hating their own cultural heritage.

This obsessive negativity towards Hinduism needs to be named and shamed.