Hindus killed in Afghanistan: Try telling it to Indian Express 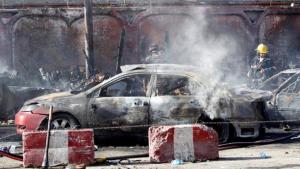 Jalalabad in Afghanistan suffered a horrific bomb attack on Sunday. Out of the 19 killed, 17 were Sikhs and Hindus. All mainstream English dailies covered the news in detail: mostly on front pages. What did Indian Express do?

Indian Express didn’t mention one single Hindu killed!!! It rewrote the Jalalabad story; gave it a Chandigarh dateline; and put Express News Service for byline! But no Hindu killed in a 1000-wordathon piece, spread over two pages. In other words, they rearranged the crime.

Why did Express go to this length to rework the story, sitting in air-conditioned office, between puffs and coffees, an occasional visit to loo, some 5400 kms apart (yes I worked out the distance)? Is it difficult to state the fact that Islamic State (IS) terrorists killed Hindus among others? It’s a question which Express needs to answer to its paying readers.

Most mainstream English journalists from my times in the 90s would readily concede it has changed for the worse. Most now look over their shoulders and pen stories which doesn’t fall foul of the editors. If you make your editors happy; you make their “bosses” happy who it must be said are anything but neutral.

There is a saying in criminal investigations: follow the money. So next time you wonder why our Lutyens Media has only hatred for majority Hindus (I had once offered Rs50,000 as cash prize for showing a pro-Hindu front page story on Indian Express—the offer still stands after 2 years!) or why a Rohingya refugee evokes copious tears while 5 lakh Kashmiri Hindus, displaced in own homeland, are not a matter of human rights, you must ask a simple question: who feeds these “fake news” in our mainstream newspapers?

By a logic of deduction, it surely can’t just be an individual or a corporate group. There ought to be a religious or political ideology: Hinduism, a pagan belief system, historically has been in cross-hairs of monotheistic Islam and Christianity; Politically, anti-Hinduism is the very core of Communists and their ideology. Communists are atheists and would do anything to bleed Hinduism to death. It makes them natural friends with Christoislamic forces in this country.

Communists would love India to be “balkanized” into hundreds of nations. This is not my opinion: this was stated by a top functionary of the Soviet Union during Joseph Stalin era: “The Indian Communist Party wished to see the country divided into independent States.” (Page 310: The Untold Story of India’s Partition by Narendra Singh Sarila).

Once you see our newspapers from this prism, a lot of things begin to fall in place. You would see “lynchings” being reserved for Muslim victims while the word is studiously avoided when a Hindu is involved; an unfortunate “Kathua” victim brings the “mombatti gang” on the Parliament Street while even a microscope can’t show you any outrage on a Hindu girl-victim; a Kanhaiya Kumar is only exercising his constitutional “freedom of speech” right in the JNU but a similar right is not extended when a Baba Ramdev is invited on the campus. Semen-filled balloons are rumoured during Holi; firecrackers in Diwali can evoke a Supreme Court ban; a Jallikattu is torture against animals but not the annual massacring of thousands in the name of Islam for one particular day of the year. Terrorists are human rights issues but a martyred soldier possibly deserved his fate. (Try recalling any editorial you have seen in your newspaper which has empathy for our brave men losing lives to keep India united).

These newspapers would accuse BJP and RSS for stoking communal and casteist fires in this country. They would never explain their own heinous roles in dividing the country up when they describe the thieves, robbers or smugglers as Dalits or Muslims. The same rule is not applied when a Hindu is the victim, like the unfortunate ones in Jalalabad on Sunday.

Yet, these presstitutes remain the high priests of “secularism” and “human rights.” They never catch the eyes or rods of bodies like Press Council of India or Editors’ Guild of India. Those who demand the highest standards of probity against the RSS/BJP/Hindus would demand none from the other side of the wall. Still, we must accept them as wishing well of India and its citizens. All they aim is communal and casteist divisions.

So, who doesn’t want good of Hindus in their own country? Who benefits if India is broken up in pieces? What are we doing, as readers or citizens, to combat these brazen “fake news”? If these questions don’t engage you, you are neutral at the cost of your own country and your future generations.