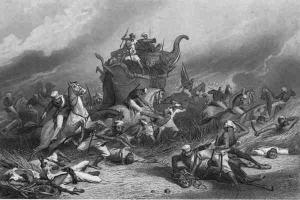 (I read an absolutely horrendous editorial in Times of India on April 13, 2019. It’s an apologist questioning why Jallianwala Bagh must be raked up after 100 years. Who would it help except bursting the old wounds?

In a perverse way, I am also thankful to this piece. It ended my own confusion. My studies have convinced me that the so-called “ganga-jamuni tehzeb” in India is fake. But I’ve always hesitated in rupturing the delusion. Why put living Indian Muslims in trouble by bringing out the fake “ganga-jamuni tehzeb” narrative?  Who would it help except inflaming the communal passions?

But the Times of India piece has broken my spell. Facts must not be held back. For if we do, Hindus would never know of their past. If they don’t know their past, the present and future is devoid of identity and full of confusion and guilt.  That’s the same project of Break-India forces. In what way then I am being any different? Could I be said to be fighting the Break-India forces???

My knowledge of fake “ganga-jamuni tehzeb” doesn’t prejudice me against my Indian Muslim brethren. But I am not now holding myself back any longer. I expect readers to question this three-part series and if convinced, still not hold it against present-day Indian Muslims. But let’s refuse to be a fodder to Break-India forces.

Harsh Narain (1921-1995) is little heard of. He was an author and professor, among others in Banaras Hindu University and Aligarh Muslim University. He has done important work on Islam and Hinduism, most of which are unavailable. NewsBred happen to chance upon one of his book “Myths of Composite Culture and Equality of Religion” which is an essential read to ignite the debate on the so-called “ganga-jamuni tehzeb” of India.

NewsBred has spread the essence of this book in three sections, the first one of which can be read here and the second one is produced below in Harsh Narain’s own words) :

“Mere permanent settlement in a country doesn’t entitle a plunderer to be looked upon as indigenous. It must be seen who’s interests it is to serve. What is his attitude towards Indians. e.g European settlers entered America, ruined Red Indians. Would the latter consider him as composite? While white Americans celebrate it as Thanksgiving Day, the day on which the Pilgrim Fathers stepped on American soil, the native Red Indians observe it as a day of mourning.

“Sayyid Nuraddin Mubarak Ghaznawi Suhrawardi, Shaykh al Islam of Sultan Iltutmish, led a deputation of Ulama to the Sultan and advised him to give an ultimate to the Hindus to embrace Islam or face death. A similar suggestion was made to Jalaladdin Khalji: “Don’t you see that Hindus, who are the worst enemies of God and of Islam, pass daily below my royal palace to the Jamuna beating drums and playing flutes, and practice before our eyes the worship of idols with all the rituals? Fie on us unworthy leaders who declare ourselves Muslim Kings! Qadi Mughis-ad-Din’s advice to Sultan Aladdin Khilji was on similar lines and the Sultan confessed that he had humiliated and pauperized the Hindus to his utmost.

“All Mulsim rulers wanted was to turn India into a Dar al Islam (land of pure Islam).  They did it everywhere, Egypt, Turkey, Iraq, Syria, Iran and Afghanistan. After conquest of Iran by Arabs, Persian went into a coma for two centuries.

“Alberuni observes that the “repugnance of the Hindus against foreigners increased more and more when the Muslims began to make their inroads into their country. Mahmud (Ghaznavi) utterly ruined the prosperity of the country. Their scattered remains cherish, of course the most inveterate aversion towards all Muslims.

“Islam has registered a signal success in carving three independent Muslim sates—Afghanistan, Pakistan and Bangladesh out of India’s mainland, in Islamizing in toto the Indonesia marchipelago, Seistan Transoxiana, Sinkiang and Maldives and several other islands colonized by the Hindus and forming part of what is known as Greater India and Islamizing India to such an extent that the Muslim population of even the truncated India is greater than that of any Muslim country other than possibly Indonesia.

“Eulogizing the role of sword of Islam in devastating Hindustan and ravaging Hinduism, Amir Khusrau sings: `Thanks to the sword of our holy warriors, the whole of this land has become a forest denuded of its thorns by fire. The land has become saturated with the water of the sword, and the dust of Kavir is lying underground. The strong among the Hindus have been trodden under foot, and are constrained to pay tributes with their hands under that of the tribute collector: Islam became triumphant so gloriously and leaders of Kufr (Hinduism) suffered the scourge of Islam so ignominiously that, had not the Shariah granted exemption from death by payment o Jizyah, the very name of the Hindu would have been extinct root and branch.’

“The Muslim rule in India, as elsewhere, was wedded to the cause of Islam and blotting out of Kufr/Hinduism altogether.

“In the medieval India chronicles, writes famous author KS Lal, `The sovereign is always mentioned as the `king of Islam’, the territories of his empire as `the Land of Isla’ its armies as
`soldiers of Islam’ and its religious and judicial head as `Shaikh ul Islam.’  To the Muslims, the Hindus were saleable, enslavabale and slayable at will.

“The dominnt culture in the Gangetic plan became Islamic, and the Hindus became a cultural proletariat…Thus the course of political history in northern India reduced both Hindu culture and religion to the level of a folk culture and folk religion by depriving it of its light. Sanskrit learning virtually disappeared from the region.

“With the loss of royal patronage, the Brahmanas and Kshatriyas had to give up their caste vocations and become peasants, thereby depriving Hinduism of its higher expression. The destruction of temples and centre of learning dealt a further blow to the leadership of Hindu society. The two higher castes suffered further depletion through mass enslavement.

“Alauddin khilji had 50,000 slaves; Firozshah Tughluq had 1,80,000 slaves. Muhammad Tughluq sold thousands of slaves everyday at throwaway price. The slaves had perforce to embrace the religion of their masters. For instance, on the capture of Kalinjar (Bunelkhand) in 1202, `50 thousand kaniz o ghulam, having suffered slavery, were rewarded with the honour of Islam.’ Muhummad Ghori is reported to have converted 300,000 to 400,000 Khokhars (people from Rajput community in Punjab) and Tirahias to Islam.

“In fact, forcible conversions on a large scale have been taking place frequently from Muhammad bin Qasim down to fall of Tipu Sultan, or rather till today in Pakistan if not in Kashmir.

“Again, it was the policy of the Muslim rulers in general to build mosques, khanqahs, inns, orphanages and schools of Islamic learning from state funds, that is to say in effect, from the pockets of the Hindus but nothing for the Hindus.

The fact is that Islam or the Ummah (Muslim culture/community) knows no cooperation on the basis of equality or peaceful coexistence with the Kafirs, to whom it offers at most only four alternatives: (a) Islam; (b) the sword; (c) Slavery; and (d) Jizyah.

(Next: Part III: “Most Sufis were busy proselytizing Islam”)