Horrid twist to Modi’s gift of cows to Rwanda 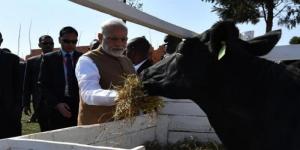 The picture this morning captions that Prime Minister Narendra Modi has gifted 200 cows to Rwanda under the latter’s Girinka programme – one cow for one poor family, with the first female calf gifted to the family’s neighbour.

The narrative is revolting. The Quint publishes a report with the tweet which insinuates “lynching” for a cow smuggler—in this case Modi! (sic). The horrid website which was left red-faced on its reporting on Kulbushan Jadav finds it “just-for-laughs.” It finds it ironical that Modi is gifting cows to a country which is beef-eating.  I tell you what the irony is: it turns out that those who referee against “trolls” and “fake news” are its marquee players.

Meanwhile another news, within hours of “gift of cows”, gets no narrative.  Waseem Rizvi, head of UP Shia Waqf Board, asks Muslims to give up eating beef. Rizvi says “cow-meat” is forbidden (haram) in Islam. You won’t find this news in your Indian Express or The Hindu; Times of India or Hindustan Times. Nor in putrid news websites. For it would mean challenging the “Shias” of this country. Lest you don’t know, India has the largest Shia population in the world after Iran. Shia vs Sunni is a subject best shoved under the carpet. Why puncture the “Persecuted-Muslims-in-India” narrative? Why publicize it and make Muslims wiser?

May I request you to google “Are Cows Sacred to Hindus” and “beef-eating in Islam”?  You would find dozens of articles which would debunk the former and uphold the latter. As a Hindu, I know that on “pitra-paksh” (praying ancestors) feeding cow is mandatory. As a student, I know cow-fat on cartridges sparked the 1857 Indian War of Independence that shook British Empire to its bone. As a citizen, I am aware that banning the “cow-slaughter” is directive principle in Indian Constitution (Article 48) with exemptions to a few states.

Yet, Hindus are tarred hypocrites. Don’t we see uncared cows on our streets? Don’t we make billions out of beef exports? Aren’t we snatching away the livelihood of thousands? Isn’t it an intrusion on “eating-habits” of minority?

Who are we to tell them that uncared cows are strictly an urban phenomenon; or that beef export is mostly of buffalo-meat; or that illegal slaughterhouse can cause an epidemic and shouldn’t be seen as a job for criminals; or that eating-habits can be mended.

It might be true that Muslims are fed on beef from an early age. It might also be true that this practice is an anathema to Hindus.  But what’s undisputed is that “eating-habits” can be mended for the larger good. Even if you don’t do it, a public proclamation on the lines of Shia Board chief could promote amity, reduce polarization.

There are vivid, live examples of exemplary Hindu conduct in this regard. I am yet to come across any Hindu organization which encourages “sketching” of Prophet in the name of “freedom of expression.” In spite of intense attacks on Hindus’ faith, belief and festivals by motivated NGOs, media and occasionally even by judiciary, Hindus have never stepped out of line. Not one instance, and we are talking of 1000 million Hindus in India.  (Yet “Hindu Pakistan” and “Hindu Taliban” are promoted, never pulled up by media).

Unlike Pakistan and Bangladesh, where minority Hindus have been driven out of existence, Muslims in India continue to grow its’ share in population. There is no uniform civil code to hassle faith.  Many countries, who are shining beacon of democracy, don’t allow such laxity to Muslims in the name of “Sharia” or “Quranic” tenets. For instance, polygamy is banned in United States. Just being Muslim doesn’t give you the freedom to keep more than one spouse.

So Muslims can live without polygamy but they can’t without beef. What logic is this? Especially when beef-eating is not mandatory in Quran (I am not even quoting Rizvi who says cow-meat is “haraam” in Islam). Just imagine the outpouring of goodwill if Muslims went public with the intention of forsaking beef. It would bridge the divide like nothing else in this country.

But that would keep rotten media and their website choirs out of business.  They report “beef-fest” with glee; semen-filled balloons in Holi, however fake, is never apologized for; and as in the present Modi gesture in Rwanda, a call for his lynching is made in the name of “just-laughs.” Shias, meanwhile, are no muslims in their eyes.