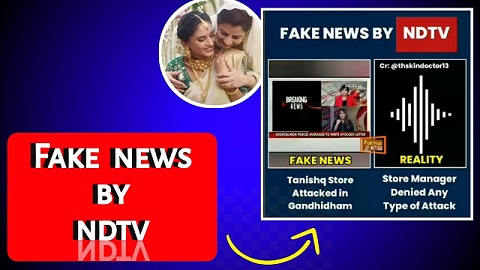 It’s about NDTV. It yesterday ran a story that a mob had attacked the Tanishq showroom in Gandhidham, Kutch, Gujarat. As luck would’ve it, a netizen alerted all that the showroom denied any such thing to have taken place. It was followed by a rebuttal from the local police. Then came the declaration by the Gujarat home minister that the offending news outlets who have circulated the fake news would be persecuted.

How do you think NDTV has responded to the development? First it changes its report on its website, claiming the showroom had been “targeted” but not “attacked.” Then they stated that the showroom had received “threats.” Then came multiple watering down of their reports by the NDTV.

But in the wake of the news having been discovered as “fake”, NDTV, or at least one of its anchor, has done a completely new take. Its anchor Sanket Upadhyay went to length to explain that the word “attack”, as the world perceives it to be, has several meanings and not just a “physical attack.” Have a look at his tweet below:

Gujarat police admits that threats were made at a Tanishq store. And as a consequence the manager had to write an apology note.
BTW, here’s the dictionary meaning of the word attack. ‘An act of saying strongly that you do not like or agree with somebody/something’
à¤•à¤Ÿà¥ à¤†à¤²à¥‹à¤šà¤¨à¤¾ https://t.co/PKbkY637xO

So as per Sanket’s words, “Attack” also means “strong rebuttal.” In his words, attack is an “act of saying strongly that you do not like or agree with somebody/something.”

Is the guy really as dumb as he is sounding in his tweet? I mean NDTV suggests a mob had gone to the showroom—no such thing had happened—and “attacked” which in the words of NDTV anchor should be interpreted as strong criticism. Some defence this.

Perhaps the anchor didn’t read what his own channel NDTV has clarified in a statement: “The Gujarat police say people made threats at a Tanishq store after which store manager had to write an apology note. They claim this is not an attack.

All that has happened in the wake of Tanishq ad could be read here.