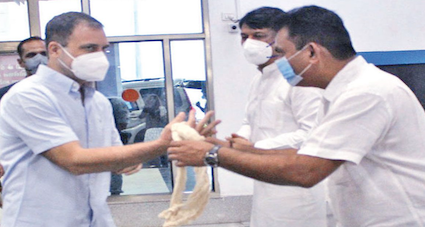 Congress leader Rahul Gandhi appeared before a magistrate’s court in Surat to record his statement in a criminal defamation suit filed by a Bharatiya Janata Party MLA Purnesh Modi from Surat over his alleged remarks on people with ‘Modi’ surname.

When the magistrate asked Rahul, the Lok Sabha MP from Wayanad in Kerala, whether he had said Prime Minister Narendra Modi gave Rs 30 crore to an industrialist, he told the court that being a national leader he keeps raising issues of corruption and unemployment in his addresses in the interest of the nation, and it is his right to do so.

When the court asked if he had said all people with Modi surname were thieves, Gandhi claimed he never said such words.

Former Congress President Rahul Gandhi was booked under Sections 499 and 500 of the Indian Penal Code, which deal with criminal defamation