I lost my two children: Shinde breaks down in assembly 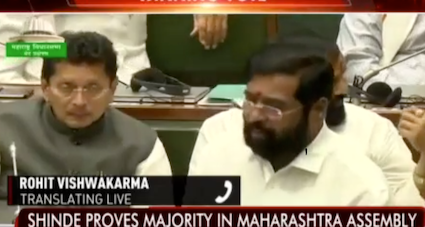 Eknath Shinde broke down today during his speech in the Maharashtra assembly, his first as Chief Minister after an easy trust vote win.

He also revealed he almost became Chief Minister of the previous Shiv Sena-NCP-Congress alliance but for objections within his party.

Describing what he alleged were threats to his family over his revolt against the Shiv Sena boss and then Chief Minister Uddhav Thackeray, Eknath Shinde referred to his children, who died in a boating accident in 2000 and choked up.

He shared that Anand Dighe, a Shiv Sena icon, told him to wipe his tears and those of others as well. “He helped me recover and made me leader of the Shiv Sena in the assembly,” he said.

Shinde’s son, 11, and daughter, 7, drowned when a boat overturned during their visit to a village. Mr Shinde grieved for a long time for his children.

His oldest son is a Shiv Sena MP.

Shinde, defending his rebellion, said treachery was not in his blood but he was humiliated over an election result and he could not take it.

Shinde claimed he was going to be named the Chief Minister of the Maha Vikas Aghadi, but the NCP’s Ajit Pawar opposed him.

“Ajit Pawar told me later ‘we had no objection to you, the objection was from your party’. At Sharad Pawar’s instance, Uddhav Thackeray was made Chief Minister. I supported him wholeheartedly,” he said.

Looking at the opposition benches, he remarked: “Don’t take it personally. But many MLAs were worried about their identity and insisted that the BJP is our natural ally.”

The Shiv Sena, he said, should have benefited from Uddhav Thackeray as Chief Minister but they didn’t.

On his revolt, Shinde shared that he held secret meetings “when no one could find out, after everyone slept and before they woke up”.

“We were not born with golden spoons. An ordinary man can also become Chief Minister. This is a government of chaiwalas, rickshaw walas, vegetable sellers and farmers…all. Is it wrong to work? Prime Minister Narendra Modi was called chaiwala – that party is finished,” he said.