If India Burns: This murder is a clue but we all can’t hear the footsteps of doom 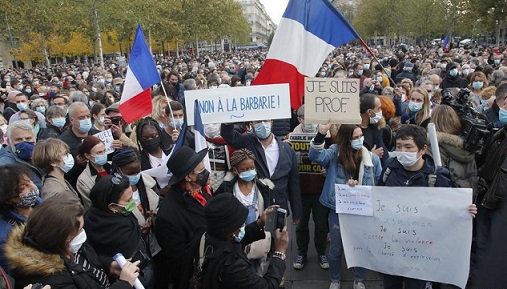 You must not have heard of Samuel Paty. Well, he was the 47-year-old high school teacher who was beheaded in Paris for showing caricatures of Prophet Muhammad in classroom on Sunday.

You must not have also known that France is on streets thereafter. Tens of thousands are streaming out on the roads of Paris, Lyon and Marseille (see image above) and its interior minister Gerald Darmanin is vowing to remove “the enemy within.”

Who is there to tell you that France has since conducted dozens of raids, cracked down on aid groups and is moving legislation to expel en masse foreigners of Islamist background?

It’s a seminal moment in France’s history after Second World War, indeed of Europe, as the Old World, at least for the last two decades, has grappled with the growing Islamism within its ruptured society. France has now lifted the baton—and others would soon. We could all then write editorials on the rise of Right Wing.

Lest you see this as a problem away from home, and can’t see a corollary to the Tanishq ad, you need to pay attention. An advertisement is pulled down for millions of netizens protest on Love-Jihad. Newspapers are aghast. Artistes and advertisers are up in arms. It’s viewed as tyranny of right-wing trolls.

There are no questions if Love-Jihad is for real. That Hindu girls, marrying under Muslim Personal Law, have to convert to Islam. (And it could only happen in Mosque by an Imam). That Islam considers it an apostasy—punishable by death—if you hide idols of your other “gods” under your closet. And dare the girl resist for under Muslim personal law, she would lose all her rights of property and inheritance.

But such debates never take place. Our newspapers look the other way. No OpEds. No those academicians and activists bristling with outrage. The same as it has happened to Samuel Paty. The same as it happened to Kamlesh Tiwari last year. Or in Bangalore riots more recently. There is an elephant in the room and we are looking away.

Newspapers, who file an RTI for a penny not gone to the account of a UP farmer, don’t probe. They delude themselves that anger of the masses would blow away if they ignore. That’s why be it Tanishq ad or Kamlesh Tiwari or Bangalore riots, there’s no internal debate. The wound festers till it eats away your internals.

That’s what happened in France. Charlie Hebdo in 2015 had shaken them. Samuel Paty has now taken them over the edge. Another Kamlesh Tiwari and this could well be our own fate. It’s a disaster waiting to happen. We could all then blame our newspapers for indifference, our governments for timidity and our judiciary for begging to Shaheen Bagh. Be it Hindus or Muslims, we both are ignoring the approaching steps of doom which would leave no one standing.

Good Indian Muslims, and that’s the majority, are captive to a handful. They must raise themselves and ask for Uniform Civil Code (UCC). They must insist that in India, there could be only two marriage codes: Hindu Marriage Act or Special Marriage Act. Muslim Personal Law can’t be its own island.  They must not fall for those images and videos of good Muslims which emerge in our media after an excess by their brethren. Like it did in Paris after Samuel Paty (see image below). These are shams and are meant to dress up the deeper rot which is eating up the vitals. Good Muslims don’t need Imams and Mullahs between them and their own Quran. Good Muslims can’t put rights above their duty.

Paris bears a likeness to Hindus. Like sporadic clouds in the sky which give way to cloudburst one fine day, sweeping the life below to drains of death, there are unconnected events which are leading towards a Hindu Collective. Some are unhappy that State controls their temples but not mosques. Some have a grouse that their schools are inhibited but not madarsas. Some cry foul that their religious travels are not subsidized and there is no aid for the marriage of their daughters. Then they prevail on Chhapaak. Then Sadak-2 is sunk even before it sees light. Then Tanishq Ad goes out of circulation. All these are rumblings of a cloudburst.

All this while our media barks up the wrong tree. Trolls and andbhakts are the villains. The underlying malaise is ignored. A question goes abegging what happens if this power reflected on social media was to translate into our streets. What happens if an Indian Samuel Paty is followed by lakhs on streets, a severe government crackdown and indictment by their leader on “Islamist separatism” (Emmanuel Macron) and call by the equally popular (Marine Le Pen) for “a strategy of reconquest” and that “Islamism is a bellicose ideology whose means of conquest is terrorism.”

Who helps India when it burns? You and I can’t run up to media which chooses Hathras but ignores Lucknow; supports Tanishq Ad but doesn’t delve on Love-Jihad. An opposition run by foggies and discredited which lies through teeth and from both sides of mouth; a Centre which is hemmed in on every step it takes: from Aadhaar to GST to Triple Talaq to Farm Bills etc. A judiciary which is bound to cave in under the weight of PILs sooner than later.

We all are being swallowed by the inexorable flow of events. We could all be saved by a resolve, a glimmer of which I read this morning