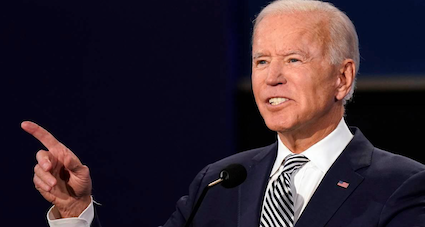 The United States president Joe Biden became a matter of laugh after committing a series of inexplicable goof ups during his town hall event which was organized by CNN and hosted by Anderson Cooper.

During the event Biden spoke on a range of issues, spanning from China’s aggression, high inflation, abolishing the filibuster, and gas prices.

But it wasn’t just the words he said that were called into question, but his stance, demeanour, and appearance were widely mocked.

According to a report, after being asked about the high price of gasoline, Biden was slow to respond and maintained an unusual posture: “In the near 20 seconds it took the host to tee up the question, Biden held his forearms out, with his elbows at right angles and fists clenched.”

The hashtag #IncoherentJoe was trending on Friday morning, along with #cornholio, a reference to the 1990s era MTV cartoon Beavis and Butthead.

Some other social media users suggested the president was holding an “imaginary jet pack.”

Another odd moment at the town hall occurred when Biden made the misleading statement, “You have 55 corporations, for example, in the United States of America, making over $40 billion, don’t pay a cent—not a single little red cent,” and to emphasize the point as he whispered “don’t pay a cent,” he made a circle with his index finger and thumb. That moment was also shared on social media.

Another embarrassing moment for Biden was when he forgot the name of America’s second-largest port.  Biden was speaking on the supply chain woes ahead of the holiday season when he stammered in his speech, unable to call to mind the name of Long Beach Port. Cooper had to intervene to remind the US president he was talking about the aforementioned port.