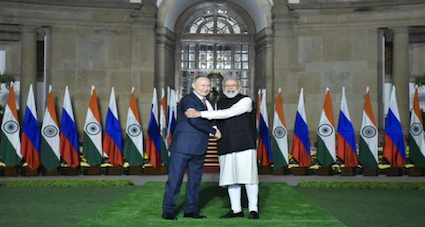 Russian president Vladimir Putin has termed India as a “time-tested friend” in his opening remarks from the Hyderabad House in New Delhi.

Putin mentioned that trade has risen by 39% and investment was at a whopping 38 billion dollars between the two countries.

“I am so happy to travel and visit India. We are holding summits every year, taking turns in India and Russia. Unfortunately, we had to skip last year because of the pandemic. I thank you for your invitation this year. We perceive India as a great power, a friendly nation, and a time-tested friend. The relations between our nations are growing and I am looking into the future. This year, we have seen an increase in our trade by 38%. We have every opportunity to reach the highs of trade. And the same applies to investments. Mutual investments stand at 38 billion,” he said.

Placing special emphasis on the defence ties between the two nations, the Russian President highlighted joint military exercises between the forces and said that India and Russia cooperated in the military sector ‘like no other’ nation. “We are cooperating and working on promising matters. That applies to the energy sector, tech, and space. We also cooperate in the military sector, like no other country. We also develop high technologies together as well as produce in India,” he stated.

“We have a common agenda which is environmental cooperation. We think about the green agenda and development of our economies. We continue to cooperate on global agenda where our positions coincide. We also deal with terrorism and the fight against drug trafficking and organized crime. We are concerned about Afghanistan as well. We hold joint military exercises both in India and Russia and I thank you for this. Once again thank you very much for your invitation,” Putin concluded.