India faces a monumental issue with its waste of PPE kits 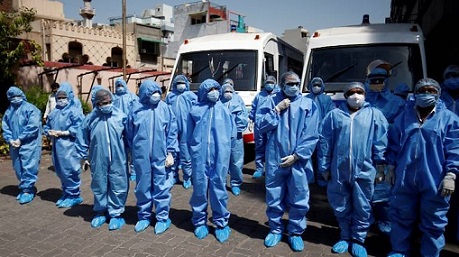 2020 was a year like no other. The year did not go well with anyone. The pandemic has left the world in a chaotic and exhaustible state. It has forced us to breathe through masks and confine ourselves to our homes.

However, when people were asked to maintain social distancing and follow a strict lockdown, several reports made the headline stating there are drastic improvements in air and water quality. This came as a silver lining amid the pandemic. While the cleaner environment came as the only source of delight during the otherwise gloomy shutdown, it remained short-lived.

The problem starts with the issue that these face masks and PPE kits are single-use. Mostly made from polypropylene material- a form of plastic has become a vital matter of concern for environmentalists and governments across the world. They are a significant source of plastic pollution and have set back the global efforts to reduce the usage of plastic.

With the outbreak of COVID-19, the medical waste production in Wuhan, China boomed to 240 TPD (tonnes/day) from 40 TPD.

Indian scenario wouldn’t be any different since it has more covid cases than China. India produces around 101 Metric Tonnes per day (MT/day) of covid-19 related biomedical waste, as per a report by the Central Pollution Control Board (CPCB) in the National Green Tribunal. This medical waste is in addition to the normal biomedical waste of around 609 MT/day that the country generates.

It has been reported that at the current rate of plastic production, consumption, and management, there will be a 113 percent increase in annual plastic leakage into oceans by 2040 i.e. approximately 30 million metric tonnes of plastic will end up in the ocean per year.

A report by the World Wide Fund for Nature has approximated the number of masks and gloves that may end up in oceans. “If even only 1 percent of the masks were disposed of incorrectly and perhaps dispersed in nature this would result in 10 million masks per month dispersed in the environment,” the WWF reported.

Meanwhile, the recycle man of India, 27-year-old Binish Desai (image above) turned millions of used gloves, masks, and PPE kits into something extremely useful. The environmentalist and innovator from Gujarat came up with a unique solution to India’s growing problem of disposing of covid medical waste.

He said while people were busy talking about how nature was healing, he almost had an eco-anxiety attack- “I thought that the large amount of PPE kits being used would create a new type of pollution – the PPE pollution which we are now aware of”

By September, he came up with the idea of converting the protective gears into bricks for building. He said he already has made more than 40,000 such bricks for projects including homes and factories and is gearing up to produce 15,000 a day.

More than half of the bricks are made of 52% of shredded PPE kits, which are kept untouched for the first 72 hours and then sanitized. apart from that, bricks use 45% paper sludge, and 3% binding agent-formulated gum base which they have been already using in the previous bricks hence named them – bricks 2.0

“The process of making the brick is similar to the P-Block, and I added PPE made from non-woven fabric which includes masks, gowns, and head-covers. I started experimenting with the method in my home-lab, and soon made a few in my factory,” says Binish. He said he could not approach national-level labs due to the lockdown situation but got it approved from a government-accredited laboratory.

Talking about the progress of the experiment, he said it is just the start and he is eager to collaborate with the government to convert biomedical waste into the bricks that further could be used in road construction and other infrastructure projects.