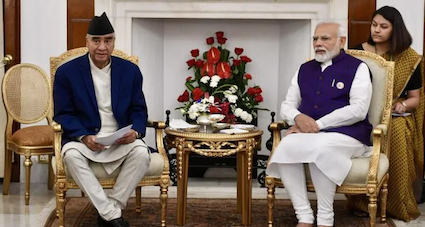 Indian Prime Minister Narendra Modi, while holding bilateral talks with Nepalese counterpart Sher Bahadur Deuba, said India has always been a firm companion in Nepal’s journey of peace, prosperity and development. He added that India will always stand by its neighbouring country, Nepal when it comes to development.

Addressing delegation-level talks at Hyderabad House in New Delhi on Saturday, PM Modi called his Nepalese counterpart the oldest friend of India and added that the relationship between both countries has deepened further during his regime. He said the friendship between India and Nepal could not be seen anywhere else in the world.

”Deuba ji is an old friend of India. As the PM, this is his fifth visit to India. He has played an important role in developing India-Nepal relations. The friendship between India and Nepal, the relation between our people – such an example can’t be seen anywhere else in the world,” said PM Modi.

Notably, several documents and MoUs were signed and exchanged between India and Nepal in the presence of PM Narendra Modi and Nepal PM Sher Bahadur Deuba. With this, Nepal has officially joined the International Solar Alliance. Referring to the several MoUs signed between the two nations, the Indian Prime Minister said both sides have discussed various aspects– especially, energy, finance and transport. According to PM Modi, his Nepalese counterpart has also agreed on reaping the benefits of the opportunities for cooperation in the power sector.

“We discussed various aspects of our cooperation, reviewed the progress of various projects and also discussed the blueprint of the future. Both of us agree that we must reap the benefits of the opportunities for cooperation in the power sector, said PM Narendra Modi on Saturday.

“I am delighted to announce that several more proposals for importing power from Nepal are being approved. I am happy that Nepal has become a member of the International Solar Alliance. This will promote sustainable, affordable and clean energy in our region,” he added.

PM Modi informed that India and Nepal have also signed a major agreement on more participation of Indian companies in Nepal’s hydropower development projects. Apart from the energy sector, India has also launched the RuPay card in Nepal. “The launch of the RuPay card in Nepal will add a new chapter to our financial connectivity,” as per the joint statement released by PM Narendra Modi and Nepal PM. Earlier today, PM Modi and Nepal Prime Minister Deuba met and held delegation-level talks at Hyderabad House in New Delhi on Saturday. “Wide-ranging talks on our multifaceted partnership are on the agenda,” Ministry of External Affairs Spokesperson Arindam Bagchi said. This is Prime Minister Deuba’s first bilateral visit abroad since assuming office for the fifth time in July last year. Deuba, who is accompanied by a high-level delegation is visiting India at the invitation of PM Modi.