India-UK emerging military agreement is a sweet revenge of history 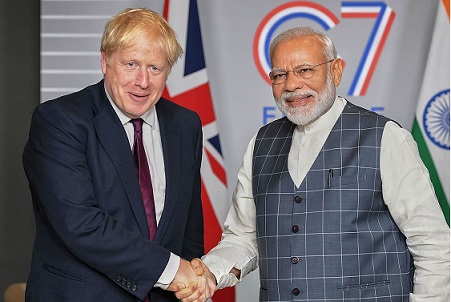 India, a country which traditionally was wary into entering formal military arrangements with Western powers, now can’t have enough.

According to Indian media report, an India-United Kingdom military logistics agreement could happen any day. India already has such arrangements with Australia, Japan, United States and France among western powers though ones with South Korea and Singapore are not insignificant either. And if it rings a bell, one with Russia is also shaping up.

It’s being hackneyed to repeat incessantly but let’s put it out for what it’s worth: Such arrangements allow both militaries to share logistics of supplies and facilities, smoothen port functions and leads to greater joint exercises.

The one with United Kingdom would bring chuckle from those with a nuanced historical memory.  India used to send millions of its men to the wars of the Empire around the world and it didn’t involve as much as a thank you. In the first World War our leaders didn’t use it as a chip to bargain with colonial masters and in the second, our Nehrus and Gandhi huffed and puffed but later fell in line. Those lost brave men have little recollection in our minds as do little we have of Azad Hind Force or Subhash Chandra Bose who incidentally had rightly judged British empire to have hollowed out from inside.

It does tell us about how serious India has lately been on Indo-Pacific and making China queasy in its neighbourhood. Those 20 soldiers lost in Galwan Valley would stay longer in memory of China than of India, it would appear. Indo-UK agreement in the making wouldn’t bring smiles in Pakistan either.

All this is extremely significant. These military logistical agreement in themselves won’t amount to much if India doesn’t have a formidable military of its own. This of course won’t be lost on India’s policy-makers who under Narendra Modi has acquired an impressive dynamism of its own. As it has been mentioned in these pages, projection is as important as the actual strength and it does signal India wants to be a global power in its own right. From Reunion to Dijbouti and Salaah to Guam, India now has access to remote reaches of Indo-Pacific. A logistical agreement with the UK would offer India access to naval facilities in the distant Atlantic. India would have access to the major garrisons in the Gulf to remote Keeling Island in the South Indian Ocean and strategic military locations near Okinawa and Busan, as pointed out in a report.

India now has an overreach from the Gulf to Indian Ocean to sensitive South China Sea even though, as said, it needs to scale up military vim of its own.

Same could be said about the United Kingdom who is ready to leave European Union and would need alliances and agreements to retain its visage of being a global player. It being a traditional Anglo-Saxon power would follow the United States lead which needs India badly against China. It is not to say that India and UK are signing a free trade agreement anytime soon. India is wary of free trade agreements and there is ample evidence it’s a right course.